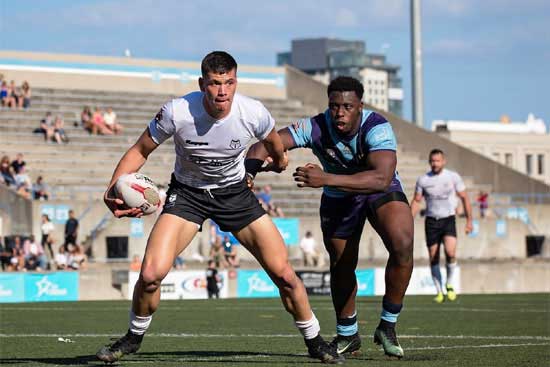 Toronto Wolfpack players Quinn Ngawati and Ryan Burroughs are starting new chapters in their playing careers having been transferred to the London Skolars in the English Kingstone Press League 1 for the rest of the season.

The Wolfpack say both are part of the club’s future plans and getting regular game time will enhance their playing abilities going forward.

“This is a great opportunity for these boys,” said head coach Paul Rowley.

“The opportunity to move down a level to play some regular rugby is often a natural step in progressing many young players’ careers and it’ll be no different with these two.”

In this, the first of a two-part series, we find out from Ngawati how he feels about the move.

Ngawati, who hails from British Columbia, was the first Canadian player to be signed by Toronto during their inaugural season in 2017. He ended up playing in two games for the team.

It was a big year for him as the teenager also made his international debut for the Canada Wolverines.

For some players, moving down to a lower grade can be quite a personal challenge, but not so for Ngawati who has adopted a positive approach to it.

“I am extremely looking forward to hopefully getting the chance to play for the London Skolars,” he said.

“I have had the opportunity to spend time around the club and everyone involved, whether it be the owners, management, players, coaches or fans are passionate and welcoming.”

Ngawati is of the opinion that playing in League 1 will help develop and improve his all-round game.
“I can see all aspects of my game improving.

“Playing the sport is the best way to learn both about the game and yourself. To hopefully have the opportunity to play on a weekly basis will allow me to grow physically and skillfully.”

And as for keeping his spot on the Wolverines’ roster, Ngawati is confident the move will help him to do that.

“I hope to gain lots of experience this season at the Skolars which will help my chances of being reselected to national team duties,” he said.

The teenager says he plans to move to London so that he won’t have to deal with the commute from Manchester and he says moving there is an exciting prospect.

“London is one of the world’s most amazing cities,” Ngawati added. “I’m excited to view the city from a different point of view than the one you enjoy when you are a tourist.”

Typical of his positive attitude, he says the move to the Skolars will give him an opportunity to work on some personal goals while also contributing to the team.

“The club obviously has its goals for the future, and if I can help them achieve those it would be truly amazing.

“At the moment I just need to focus on my week-to-week preparation and performance.

“Personally, I would like to put myself in a position to play on a week-to-week basis to grow into a rugby league player fit to compete at the next level.”