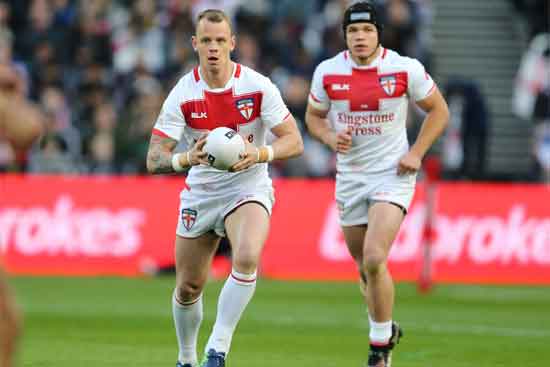 The 33-year-old stand-off who has been capped ten times for England had been named in the Elite Performance Squad for 2018 ahead of this year’s mid-season Test and Autumn International Test Series against New Zealand.

Commenting on his decision to retire, Kevin Brown said: “It feels like now is the right time for me to retire from international rugby, I’ll be 34 by the end of the year when the International Test Series comes around and I think having the rest at the end of the season will help me play better and for longer at Warrington Wolves.”

“Obviously I’m disappointed I can’t play on forever but I think I’ve been really lucky that I’ve played so many games, I started playing for England in 2010 and finished at the end of 2017, I’ve loved every minute but I just feel that the timing is right.

“I spoke to Wayne to let him know my decision and thanked him for everything. He is one of the nicest coaches I’ve had and one of the coaches I’ve learnt most from especially in such a short period. I have really enjoyed playing for him and being part of that group. I am gutted I won’t be part of that squad anymore but it is the right decision for myself and for the team.

“Playing against Tonga in the World Cup was my England career highlight, the atmosphere in that World Cup semi-final was something I’ve never experienced. I’ve played in Cup finals and now a World Cup final but nothing comes close to that game in terms of the atmosphere, the volume of the crowd, the way the lads stuck in right until the end will always be special to me.

“There’s some fantastic players that deserve a chance now and England are going to be a fantastic nation and we are definitely building towards success and I know that everyone is buzzing about Wayne deciding to stay on as Head Coach.

“I’m the biggest England fan and I’m proud that I’ve been part of that journey with them. Every time they play I’ll be cheering them on and I know they’ll do well, they are a fantastic group and I’ll always support England with my little lad and my family.”

Brown played four times for England in the 2017 Rugby League World Cup and made his debut in 2010 under former England Head Coach Steve McNamara.

England Head Coach, Wayne Bennett, said: “Kevin has been the ultimate professional and shown a great attitude and an unwavering commitment to the England programme. He contributed greatly to our performance at the World Cup and in the mid-season Test game against Samoa.

“Kevin has all the playing and personal qualities that we require from our players and showed great professionalism throughout.

“We fully understand the reasons behind his decision and wish him the very best.”

Brown won’t be replaced in the EPS at this stage.

Tickets to the England v New Zealand international Test at Sports Authority Field at Mile High, Denver on Saturday, June 23 are on sale now. To buy tickets and for more information, fans can visit www.rugbyleaguechallenge.com

England and New Zealand are also involved in a three-match International Test Series which starts on Saturday, October 27 (2.30pm) at KCOM Stadium, Hull and carries on at Anfield, Liverpool on Saturday, November 3 and concludes at Elland Road, Leeds on Sunday, November 11. Tickets for all three games are on sale now at rugby-league.com and cost from £25 for adults and £12.50 for concessions. ‘Our League’ members will get £5 off all ticket categories when purchased through the Our League App or website.