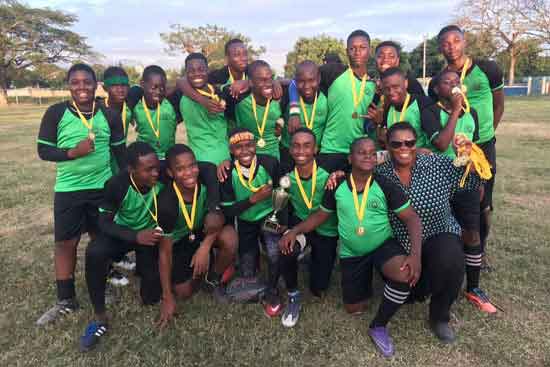 Calabar secured their third consecutive hold on the JRLA U14 National title with a commanding 36- win over The Cedar Grove Academy on Wednesday, March 7.

The boys from Red Hills Road dominated every aspect of the game from start to finish. Finals MVP, Zane Williams, scored a hat-trick of tries. He was well supported by Center Shaquan Brown (2 tries) and Jelani Barrett, Justin Barnett and Devonish Maragh with a try each. For Cedar Grove, Amar Campbell crossed for a consolatory try late in the game.

In the U16 Grand Final, Calabar had to work harder to defend their title. Spanish Town took an early 2-0 lead after Deshawn Jordan kicked a penalty on 5 minutes. Calabar responded with a try10 minutes before half time when Kevin Maxwell crashed over. Jevantae Mellard kicked the conversion to secure a 6-2 lead at the break.

Calabar’s Geovaughnie Witter converted a penalty kick 15 minutes from time to push the lead to 8-2. The game was turned on its head with 4 minutes remaining when Tyrique Brooks of Spanish Town out-sprinted Calabar’s defence and scored under the sticks, Jordan then kicked the easy conversion.

Emotions changed when from the ensuing kick-off, when Spanish Town gifted Calabar a penalty when a player in an off-side position handled the ball. An incredulous Calabar team gladly took the 2 points on offer to restore the lead. Strong defence then saw them home in the final 2 minutes.