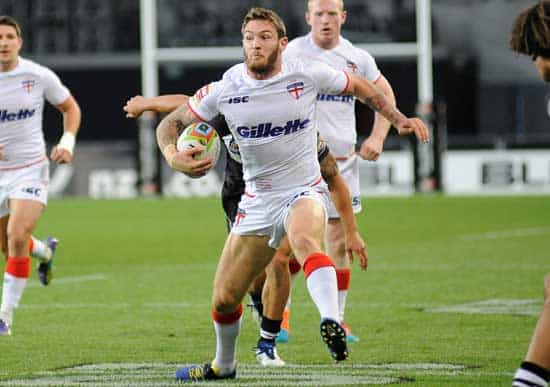 England’s preparations ahead of this year’s mid-season Test and Autumn International Test Series against New Zealand have started, with England head coach Wayne Bennett selecting a 21-man Elite Performance Squad (EPS) that will regularly meet throughout the season.

22-year-old Johnstone, who won the 2016 Super League Young Player of the Year, has impressed at the start of the Betfred Super League season scoring four tries in three games for Wakefield and will experience his first taste of the England setup since breaking into Wakefield’s first team three years ago.

Ward, Clark and Makinson all return to the Elite Performance Squad having missed out on selection for the 2017 Rugby League World Cup squad, in which England made the final for the first time in 22 years.

England Head Coach, Wayne Bennett, said: “The Elite Performance Squad sessions in 2017 proved invaluable for the players in the build-up to the World Cup and it’s important that we do all we can to enable them to spend quality time together in an international environment. The 21-man EPS includes a mixture of experienced international players from the 2017 World Cup Squad, returning players and a new inclusion with Tom Johnstone.

“It’s important for us to focus on the Test matches this year but also keep in mind the 2021 World Cup too and the return of the England Knights Performance Squad ensures that we give players valuable time in an international set up. It is a very positive step for England Rugby League and all 46 players across both squads have the opportunity to impress my coaching staff in the coming months.”

“The mid-season test in Denver is a great opportunity to test ourselves against strong opposition and whilst those selected for both performance squads have put themselves in a good place to be considered for selection, we are always looking at all players in both the Super League and NRL and the door is never shut on any player who impresses”.

The Knights last played in 2013 but return as part of the newly formed England Performance Unit (EPU) led by Rugby Director, Kevin Sinfield, that aims to develop more world-class England players for all senior squads for the 2021 and 2025 Rugby League World Cups.

Every English based Betfred Super League club is represented in the Knights squad and they are joined by 23-year-old Hooker James Cunningham, who currently plays for Championship side London Broncos and has helped the side from the capital to an unbeaten start to the 2018 Betfred Championship season.

Also included in the Knights squad is Leeds Rhinos full-back, Jack Walker, who was the youngest player to win a Betfred Super League Grand Final in 2017 and has impressed at full back for the defending champions this year. Walker is selected alongside team mate and fellow grand finalist Liam Sutcliffe. Castleford centre Greg Minikin, who played a key part in the Tigers impressive 2017 season, in which they lifted the League Leaders’ Shield and reached the Grand Final, is also named alongside his 19 year-old team mate Jake Trueman.

Wigan Warriors and Hull FC, who recently played the first ever Super League game in Australia, each have five players selected in the Knights Performance squad, including 2017 Betfred Super League Young Player of the Year, Oliver Gildart and 25-year old Hull FC full back Jamie Shaul.

“The sessions proved valuable for the Elite squad in 2017 and involving the Knights Performance Squad can only improve England’s chances in future international tournaments.”

Two sessions in the first phase for the EPS and KPS will build up to the mid-season Test against New Zealand starting with a joint meeting between both squads with staff from the England Performance Unit and current England senior staff. The squads will then split in to two separate groups for the next session. A senior squad for the Test game against New Zealand on June 23 in Denver, Colorado will be announced in June.

No International fixtures for England Knights have yet to be confirmed for 2018, but discussions are ongoing and fixtures will be announced in due course.

Tickets to the England v New Zealand international Test at Sports Authority Field at Mile High, Denver on Saturday, June 23 go on sale now. To buy tickets and for more information, fans can visit www.rugbyleaguechallenge.com
England and New Zealand are also involved in a three-match International Test Series which starts on Saturday, October 27 (2.30pm) at KCOM Stadium, Hull and carries on at Anfield, Liverpool on Saturday, November 3 and concludes at Elland Road, Leeds on Sunday, November 11. Tickets for all three games are on sale now at rugby-league.com and cost from £25 for adults and £12.50 for concessions. ‘Our League’ members will get £5 off all ticket categories when purchased through the Our League App or website.