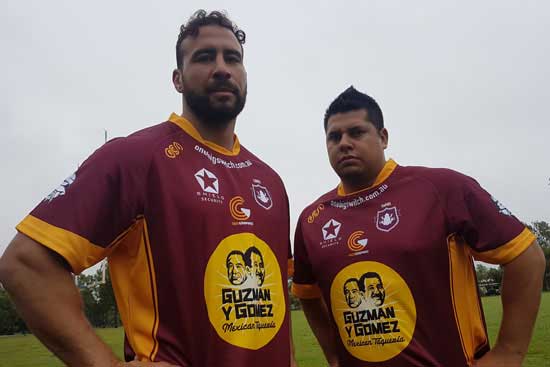 Gardner, who has Brazilian heritage and is the brother of former English Test player Ade Gardner, could easily have been playing his club football for Corrimal this season, but spurned the Cougars’ advances to settle with the Goondiwindi Boars in Queensland’s Toowoomba competition.

Coincidentally, one of his biggest tasks in Saturday’s looming clash between the Latin American communities of Queensland and New South Wales will be stopping new Corrimal signing James Horvat, who has represented Chile on both sides of the Pacific.

A product of the Parramatta Eels development system, Horvat is expected to play at five-eighth for the NSW Latino team, forming a potent backline combination with fullback Thomas Garrido who comes from the St George-Illawarra development system.

Both teams will put a Latino twist on the traditional nicknames for State of Origin, playing as the Cucarachas (Cockroaches) and Sapos (Cane Toads).

The concept was launched last year in Brisbane, where the NSW team won 32-8 after scoring three tries in the final 14 minutes to put a dominant end on an otherwise tight contest.

Players either born in South and Central America, or with family background there, take part in the event as a showpiece of efforts to grow the game for new nationalities.

This year’s match will have the added bonus of being a selection trial for a composite Latin American team which will appear at the Emerging Nations World Championship in Sydney in October.

As in the traditional Origin arena, the Queensland side is to be led by a player who graduated from Marsden State High, with coach and halfback Brad Millar and co-captain Trent Millar (both Chile) having attended the same school as NRL whiz Cameron Smith.

Queensland front rower Zuluaga (Colombia) will be a man of interest, having featured in Toronto’s early footsteps towards cracking the English Super League.

He is in Australia playing for the Charters Towers Miners in the Townsville competition, having been raised predominantly in the USA.

Aside from the Millar brothers, the Queensland team contains the Mendoza brothers – Oscar and Rafael – from El Salvador, and the Esera Catrileo brothers – Leonel and Iziah – from Chile.

Iziah Esera Catrileo is one of the best young players coming through the Latin American Rugby League system and is part of the rugby league program at Keebra Park State High, the same alma mater of Benji Marshall, Te Maire Martin and Ben Teo.

The multicultural regions of Western Sydney and Logan City are highly represented in the game, where many Latino families and students have come to settle in Australia in recent times.

Latin America presently has six nations ranked by the Rugby League International Federation and has experienced rapid growth since launching in 2013.

Chile last year won the first-ever Latin American Rugby League Championship, which they hosted, defeating Argentina 32-12 in the final of a tournament contested by 95 per cent domestic players.

The composite Latin American team to contest the Emerging Nations World Championship – known as the GYG Latin Heat – will be a mix of players flying from the opposite side of the Pacific and Latinos who star in Corrimal and a return bout in Noosa, Queensland on June 9.

Festivities at Ziems Park, Corrimal will kick-off at 5.30pm on Saturday with a tag exhibition for new and developing players, followed by the full-contact 80-minute Latino Origin at 6.30pm.

Plus two to be added from: