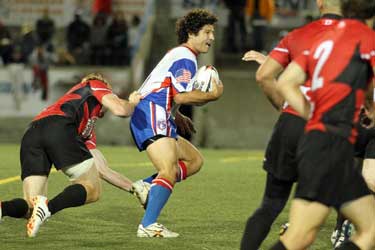 It’s not quite three months since we put the successful 2017 Rugby League World Cup to bed and already everyone is starting to think about qualifying series for the next RLWC in 2021.

Those series are set to get underway in 2019, so there’s no time like the present to get the ball rolling.

The 2021 version will be the sixteenth RLWC and the number of teams competing will increase from 14 to 16.

One of the extra two teams will be a second qualifier from the Americas region.

In the 2011 Americas zone RLWCQ the USA Tomahawks advanced to RLWC2013 by dispatching South Africa and Jamaica, then in 2015 the USA Hawks, as they had become known, won the Americas region qualifiers by beating Canada and Jamaica.

The 2011 series was held in Philadelphia and the subsequent series was played in Jacksonville and DeLand, Florida, four years later.

The location of the next qualifying series hasn’t been determined yet, although a decision on that rests with the Rugby League International Federation.

The national governing bodies of the countries involved have the option to make a bid to host the RLWCQ, meaning, theoretically at least, there could be submissions from the United States, Canada and Jamaica.

Lately there have been suggestions to consider including Central and South American nations in the qualifiers as well given the recent rise of rugby league in Latin America.

On top of that, Mexico, Uruguay and El Salvador all have national teams.

While in theory one might think that with all those countries actively involved in the game it would make sense to include them in an expanded Americas region qualifying series, but it’s not that simple. There are certain criteria that need to be met.

So, with seemingly no chance of Central and South American teams being included in next year’s qualifiers, it will come down to all or some of the original three to decide whether to bid to host the series.

“There is no prescribed format, but hosting in one country is the most effective format,” continued Kazandjian.

“USA tendered for the hosting rights in 2015 along with one other nation, so rights are not automatically conferred.”

Regardless of where the qualifying series ends up being played, under the RLIF’s rejigged qualification process it’s possible that all three Americas region rivals could end up making it to #RLWC2021 in England.

Apart from the top two that will automatically qualify, the third placed team could wind up in a playoff with a Middle East/Africa team, not Lebanon, and an Asian Pacific team with the winner advancing to the World Cup.

The RLIF is expected to announce more details on that in due course.