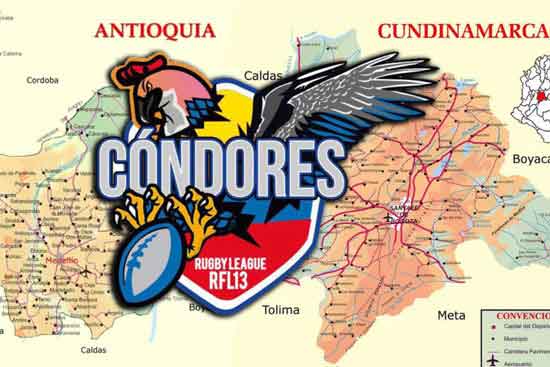 Another landmark occasion for rugby league occurred on Saturday in Bogota, when Colombia held the opening game of its own State of Origin series.

It was the first time in South America that a full 13-a-side interstate rugby league game has been played, and only the second time in Latin America, after Mexico.

More established competitions in places like Chile, Argentina and Brazil have revolved around more localised games or nine-a-side formats in previous years.

The Condores completed the tournament with a 22-18 win over Brazil and a 36-4 loss to Argentina, sparking a boom in player numbers.

Subsequently, the states (known as ‘departments’ in Colombia) of Cundinamarca and Antioquia have organised their own series to settle who reigns supreme on the domestic front.

Cundinamarca is centralised around Bogota, Colombia’s capital and largest city, while Antioquia has Medellin as its epicenter, the second-largest city in the country.

In Cundinamarca the key figures in directing the sport are Nicolas Perico Daza and Hector Linares, while Antioquia has largely been formed by Sebastian Maya Jimenez and Juan David Espinal Cano.

Colombia is relatively unique among Latin American nations in that every player to represent the country to date – even in tournaments in Australia – was born and raised in Colombia.

Most other Latino nations have a healthy portion of second-generation players born in Australia.

However due to the popularity of student migration and skilled work visas between the two countries, many Colombian-born players have been able to develop their rugby league abilities while abroad.

When Latin American Rugby League (GYG Latin Heat for short) was formed in 2013, the first three players to register were Colombian.

Since then the organisation has expanded to spread rugby league across 24 countries, with six of those now officially ranked by the Rugby League International Federation.

The Colombian State of Origin at Bogota Sports Club in Cota kicks off a huge year for the sport across Latin American nations.

Reigning regional champion Chile will also hold a ‘North v South’ State of Origin concept this year, Mexico will again have a contest between the states of Jalisco and Estado de Mexico, while Argentina is currently discussing a similar concept.

Brazil has a bevy of nine-a-side tournaments scheduled, Peru, Uruguay and Ecuador are taking tentative steps forward, while domestic training is already underway in El Salvador, with promising possibilities for the code to spread to neighbouring Central American nations.

In Australia, Latino-heritage players will go head-to-head in teams known as the Sapos (toads) and Cucarachas (cockroaches) in the Wollongong area on March 3, then again in Noosa on June 9.

There is also the possibility of Latino players from Latin Heat North America forming teams to compete in various tournaments across the USA in the northern hemisphere spring.

From all these matches a combined Latin American team will be selected to compete at the Rugby League Emerging Nations World Championship in Sydney in early October.