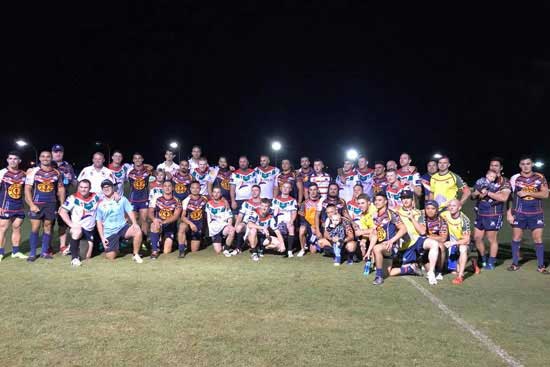 The 3rd of February was a busy Saturday for the Philippines National Rugby League (PNRL), with a team competing in the Cabramatta International 9s in NSW.

Reynaldo Penalosa, Captain/Coach of the Philippines side competing in the Cabramatta International 9s stated:

“Leading into the International 9s Tournament we had a lot of new young Filipinos coming through wanting to represent their heritage – 9 of 15 were brand new to the PNRL. The day started well in our 1st game against Papa New Guinea leading at half time, but going down at the fulltime whistle to a very skilled PNG outfit (who eventually made the Major Final against the Indigenous). Our 2nd game going down to Sudan in a game we should have won, but mistakes and poor discipline in key positions took its toll. Leading into our final game the Bowl Trophy decider against Tonga. The boys knew what was needed in a big game with a very tough opposition, 1. Sticking to our sets, 2. Getting into kicking position and 3. Applying pressure for 18 minutes. With the game plan going perfectly for us beating Tonga 22-14 and becoming the 2018 Bowl Trophy Champions. Best player on the day was Vice Captain Ted Smith.”

The PNRL would like to thank our fellow Asian brothers, ASEAN United players Jesse Subrata & Rhys Tucker for stepping in to replace injured Clayton Spendlove & Rey Penalosa who got injured in earlier pool games before the Bowl Final.

The first half of the exhibition match against the Jake’s Allstars was a close game with a score of 6-4 going into the break to the Philippines. In the second half the Philippines Admirals showed their class running away with the game with a final score of 34-10. The PNRL encourage the Rugby League community to visit the Jake’s Allstars Charity Rugby League Team Face Book page and support their work.

It was a poor performance from the Tamaraws in wet conditions but take no credit away from Hungary Magyar Bulls who adapted to the conditions better and scored 3 late tries to blow out the score line in what was a tough game of footy played in good spirits by both teams.

The PNRL would like to thank Tugun RLFC for hosting the game and the after match function, all the supporters who braved the conditions, the supporters that tuned in via the live stream, the coaches, managers, medical staff, waterboys, bus drivers and especially the players who all volunteered their time and money to help promote Rugby league and honour our wonderful country the Philippines.

We look forward now to the Emerging Nations World Championships being held in Sydney Australia from September 29th to October 13th 2018.”