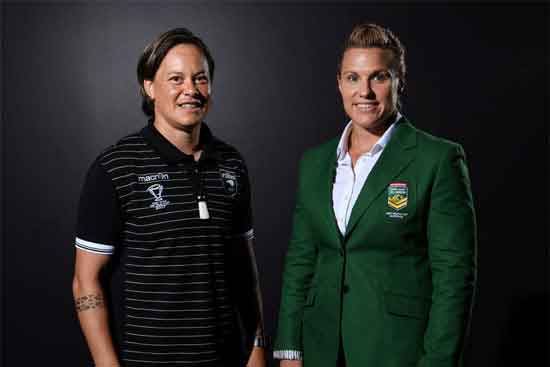 Australia and New Zealand captains Renae Kunst and Laura Mariu will be aiming to end their decade long rivalry in winning style when they lead the Jillaroos and Kiwi Ferns in the final of the Rugby League Women’s World Cup in Brisbane on Saturday.

The rival skippers, who have been fierce opponents since the 2008 World Cup, will both be playing the final match of their illustrious international careers, along with veteran Australian forward Steph Hancock.

For Mariu it will be her fifth final and she has the rare distinction of having played in every Rugby League Women’s World Cup for the Kiwi Ferns, winning in 2000, 2003 and 2008.

Kunst made her Jillaroos debut at the 2008 World Cup and was a member of the Australia team which beat the Kiwi Ferns for the first time in the 2013 decider at Headingley.

“For me to have been selected alongside Steph is great but I have always treated every game like it is my last so for me this really is no different,” Kunst said.

“I think probably after the game when I reflect it will be a bit more emotional but my focus is really on doing my job tomorrow and not letting my team-mates down.”

Mariu is hopeful she can bring her 17-year Kiwi Ferns career to a close lifting the Cup one more time.

“To say it will be a special moment is an understatement,” she said.

“Our team is ready to get out there and put it all on the field. We have so many people to thank for the masses of support we have received this year and in the lead-up to this World Cup – we just hope to make them all proud.”

The Rugby League Women’s World Cup final will kick off at 3.45pm AEST at Brisbane Stadium and for the first time will be followed by the men’s decider at 7pm AEST

The teams for the final are: