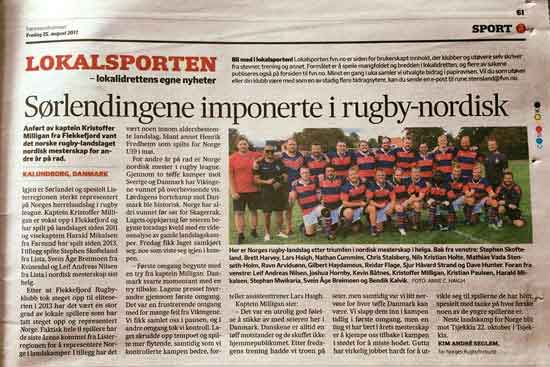 In their first campaign, Stavanger Storm have finished top of the expanded Norwegian rugby league championship, ahead of Porsgrunn Pirates. The season saw a seven-team competition, with sides spread over 1,800km, complete all the scheduled games, along with the national side competing in four fixtures, all unbeaten, in what is the most successful Norge RL campaign to date.
“Forty games being played without a single forfeit is a major step forward,” said chairman Lee Johnson. “We now look to the future with a strategic plan to develop better skills among the players. We also look forward to taking on new and stronger opposition within Europe and to do our best in the 2021 World Cup qualifiers.”

Norway also played their first junior international in 2017, against Serbia U18s, two 9s tournaments and now have 11 clubs actively training, with three newcomers set to play in the first 9s competition next year.

“We also focus on staging an event rather than a game,” added Johnson. “The intention is to recruit more youngsters to take us to the next level. We have already booked a trip to Serbia for a school team, Nannestad Norsemenn. Clubs are reporting record numbers in training and the interest in rugby league has never been higher. Significantly, the sport has also had a lot of exposure in the media, especially after our Nordic Cup triumph.”