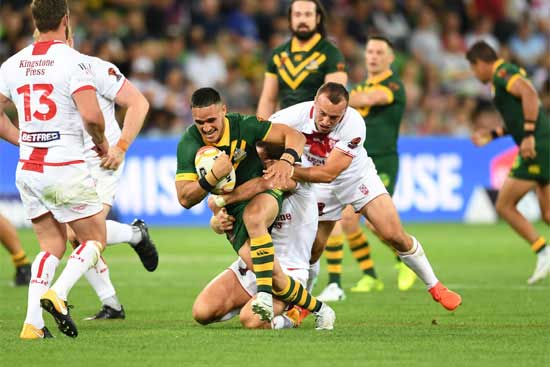 For Kick-off Times from around the world click here

Australia have named an unchanged team from their semi-final win over Fiji for the Rugby League World Cup Final against England on Saturday.

The Kangaroos are seeking to go back-to-back and defend their 2013 crown with victory at Suncorp Stadium this weekend. England are through to their first final since 1995, when they loss to the Aussies at Wembley.

Aaron Woods is set to play in the decider with a pain-killing injection after aggravating a shoulder injury. Josh McGuire and Josh Dugan are both battling ankle problems but have been named in the 17-man squad.

England has been forced into just one change with the major injury afflicting Josh Hodgson. James Roby will start at hooker instead of coming off the bench, while Chris Heighington takes Roby’s spot on the bench.

Captain Sean O’Loughlin is fighting to recover from a quad complaint but has been named to take on the Kangaroos.

Under Mal Meninga the Aussies have won all 12 Tests they have played since he took over from Tim Sheens. The Kangaroos have won 10 of the 13 World Cups that have been played.

In World Cup history Australia has win percentage of 83.3%, being victorious in 65 of its 78 tournament matches to date. In this World Cup the hosts have conceded only three tries, a total of 16 points, in five games.

In attack they have posted 204 points in five matches, for an average of 40.8 points per game. It’s a formidable record in anyone’s term.

In contrast England has never won a World Cup, with Great Britain securing triumphs in 1954, 1960 and 1972. Wayne Bennett’s team are massive underdogs, with bookmakers installing Australia has huge favourites.

But with England fielding six NRL players, along with world-class talent such as Sam Burgess and James Graham, they remain a chance. If England can topple the Aussies in the Queensland capital it would be one of the biggest upsets in rugby league history.