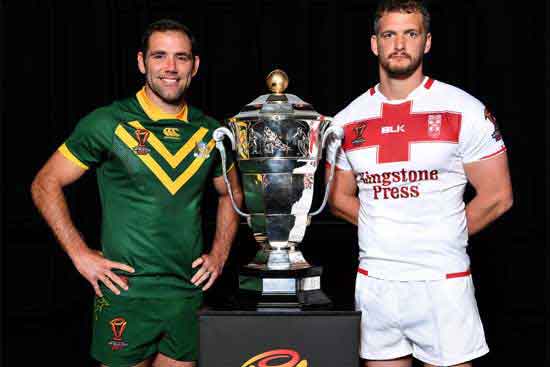 Australia and England will play in a World Cup final for only the second time after winning their (men’s) semi-finals in contrasting styles, while Australia and New Zealand will meet in a third successive Rugby League Women’s World Cup decider in Brisbane next Saturday.

The last time the Kangaroos and England met to decide who would hold the Cup was in 1995 when England – captained by current assistant coach Denis Betts – lost 16-8 before a wonderful crowd of 66,540 at Wembley Stadium.

Australia had played Great Britain previously in the tournament final in 1970, 1972, 1977 and 1982 (Australia won all but the 1970 decider) but England has faced Australia only 15 times in internationals (Australia 12 wins, England 2, one draw).

The Australians were convincing in disposing of Fiji 54-6 in Brisbane on Friday night, dominating throughout, while the Wayne Bennett-coached English side had to withstand an incredible finish by the Tongans before winning 20-18 in Auckland.

Before a sea of Tongan-representative red created by the Mt Smart Stadium crowd of 30,003 – the biggest at the stadium since the Warriors attracted 32,174 for their clash with Illawarra Steelers in the Auckland-based side’s inaugural season of 1995 – the Mate Ma’a outfit were behind 20-0 with eight minutes remaining.

With Tonga scoring three converted tries to turn the stadium into a fever-pitched atmosphere, the game went down to the final controversial play of the game when Mate Ma’a prop Andrew Fifita lost control of the ball as he seemed set to cross for the match-winning try.

This means the teams who opened the tournament on 28 October in Melbourne – a match won 18-4 by Australia – will complete it as well at Brisbane’s magnificent stadium at 7.30pm local time (8.30pm AEDT) on Saturday.

Australia go into the final as dominant favourites yet history shows that this was the case when they met New Zealand in the centenary World Cup in 2008 in Brisbane but went down 34-20.

No member of the Kangaroos team has won a World Cup on home soil as only two other Cup finals have been played in Australia – in 1968 when Australia beat France 20-2 and in 1977 when they defeated Great Britain 13-12 (both games were played at the Sydney Cricket Ground).

The decider will be a double-header with the Rugby League Women’s World Cup final between Australia and New Zealand, who each boast four dominant victories during the tournament in Cronulla after being unbeaten in the three round-robin matches and winning their semi-finals on Sunday.

While the Jillaroos are the World Cup holders after their historic 22-12 victory over the Kiwi Ferns at Headingley in 2013, New Zealand had won all three previous tournaments and beat the Australians 34-0 in the 2008 final played in Brisbane
.
This is the first time the men’s and women’s World Cup champions have been crowned on the same day at the same venue.

The Jillaroos qualified after triumphing 58-6 in their semi-final against a Canada team who won plenty of admirers during their first World Cup, while the Kiwi Ferns were equally impressive in defeating England Women 52-4 to secure a berth in their fifth successive World Cup final.

New Zealand winger Honey Hireme scored four of the Kiwi Ferns tries to take her tally for the tournament to 12 – the same number as Kangaroos winger and World Cup record breaker Valentine Holmes.

Hireme is one of three players shortlisted for the Rugby League Women’s World Cup Player of the Tournament, which will be announced along with the Rugby League International Federation (RLIF) Golden Boot winner on Wednesday (29 November) at the RLWC2017 Grand Final Lunch at the Sofitel Brisbane.