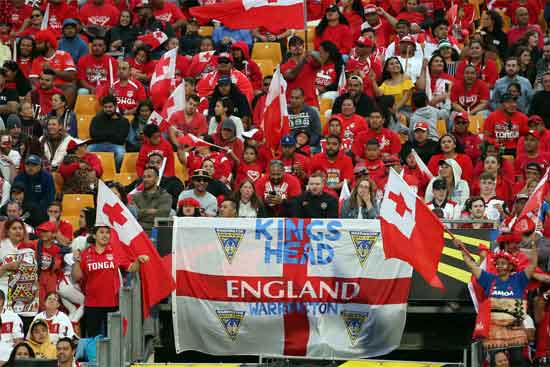 England will play Australia in the 2017 Rugby League World final after seeing off a tenacious Tonga by the skin of its teeth 20-18 in Auckland.

Gareth Widdop scored a try, set two others and kicked four goals in a fantastic solo performance to fire England into the final. Despite a vocal pro-Tonga crowd, England showed class to get the job done in hostile territory.

But the game ended in huge controversy with Andrew Fifita losing the ball as he went to score what would have been a match-winning try in the final seconds. The referee did not go to the video referee to check the play, and England escaped with the close victory.

Then Widdop got over the line after some nice lead-up work from Elliot Whitehead. He converted both tries to make it 12-0.

Tonga stretched England’s line at times but couldn’t deliver the final pass. Michael Jennings was penalized for passing off the ground early and a try to Manu Ma’a went begging.

In the second half Daniel Tupou knocked on and blew a certain try. Widdop kicked another goal after 49 minutes to take the score to 14-0.

Tonga were failing to take their chances but England wasn’t, and with 13 minutes left John Bateman scored. At 20-0 the Pacific nation looked beaten.

But Tonga woke up in the final seven minutes to score three quick tries and turn the game completely on its head. First Tevita Pangai Jr powered through to make it 20-6.

Then Siliva Havili dived over, followed immediately by Lolohea after a brilliant Jason Taumaololo bust. Suddenly the score was 20-18 with 90 seconds left.

Tonga had the ball and headed towards England’s try-line. Right on full-time Fifita lunged for the ball but it came free, and the referee called a knock on and blew his whistle.

Tongan coach Kristian Woolf was adamant the video referee should have been used on the final play of the game.

“I don’t know if it’s a try or not because I haven’t seen it again,” he said,

“I don’t know [if we were robbed]. I can’t believe we don’t look at it. The game’s on the line. I thought for very, very long periods we were on top in this game. We just didn’t quite get there tonight. England deserve some credit there, they defended extremely well there at times.”

Bennett did not believe video referee should have gone upstairs to check the final call on Fifita’s carry.

“It wasn’t a try because the ball was stripped off him,” he said.

“It was loose carry, that’s what it comes under the category of. It was a quality game of football, they had some chances. We keep turning up in defence, which was great.

“At the end of the day our defence won us the game. We had a tough job here. They’re a quality football team. You look across their team, except two or three players, they’re all NRL players. We had our hands full.”