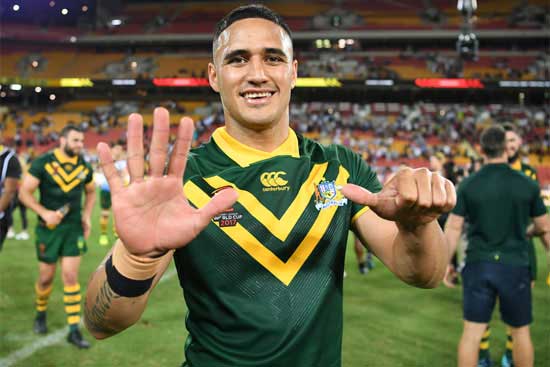 Australia are into another Rugby League World Cup final after ending Fiji’s dream in stunning style 54-6 in Brisbane.

The Bati have met the Kangaroos in the semis in the past three tournaments and every time they have been unable to stop an Aussie avalanche. This time it was no different as electric winger Valentine Holmes, who scored a sensational six tries, sent them packing.

Fiji have been impressive in this World Cup, particularly in downing New Zealand, but they were no match for Mal Meninga’s men. Both Dane Gagai and Billy Slater got braces as the Aussies put the Bati to the sword in a big way.

It was a start full for fire and brimstone for Fiji as they tried to impose themselves physically on the hosts. Jarryd Hayne in particular seemed to be on a mission against his former teammates. The Bati took an early 2-0 lead through a penalty good but this was as good as it got.

They then coughed up several penalties which game Australia excellent field position. The Kangaroos didn’t waste that gift and Slater was the first to score, after Michael Morgan made a line break.

In the 17th minute Holmes made it 12-2 when he caught Cooper Cronk’s bomb. A quick shift to the left flank meant the Cronulla flyer was soon in again.

Fiji’s ball-handling was poor and they were unable to complete their sets or hold on in the tackle. Australia made them pay as Gagai stepped around some soft efforts to cross. The score of 22-2 at half-time was ominous about what was yet to come.

After the break the hosts put their foot down and Holmes got his third, thanks to a smart intercept, just 90 seconds in. Slater and then Holmes touched down again, as the Bati fell completely apart.

After 59 minutes of pain Fiji were finally rewarded for their toil when Suni Vunivalu dived over after taking Kevin Naiqama’s pass. But there was not to be a miracle comeback.

Holmes has now eclipsed Wendell Sailor’s record of 10 tries at World Cup. In this kind of form the Kangaroos will take some beating next Saturday.

Australia will now meet either Tonga or England in the final on December 2 at Suncorp Stadium.