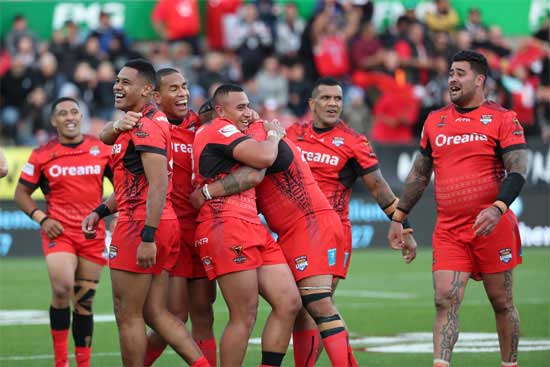 The Rugby League World Cup 2017 is pleased to announce tomorrow’s semi-final between Tonga and England at Auckland’s Mt Smart Stadium is a sell-out, drawing the biggest Rugby League crowd at that venue in 22 years.
A crowd of 30,000 is expected for the first-ever international between Tonga and England on Saturday (25 November), which is the biggest Rugby League crowd in New Zealand in five years, and the highest attendance at Mt Smart Stadium since 1995 when the Warriors attracted huge crowds in their inaugural season in the NRL.

It is also the second RLWC2017 sell-out in a fortnight in New Zealand, following the capacity crowd of 24,041 for the historic Round Three clash between Tonga and New Zealand at Hamilton’s Waikato Stadium; and the largest crowd of the tournament across the three host countries to date.

RLWC2017 Chief Executive Andrew Hill said the support and passion shown by Rugby League fans in New Zealand had been a highlight of the tournament.

“Fans in New Zealand have been treated to some history-defining Rugby League contests and incredibly entertaining football over the past five weeks and they have truly embraced the tournament,” Hill said.

“Just as important as what has happened on the field has been the wonderful celebration of Rugby League off the field, inspired by the connection between the players and the community.”

The Rugby League World Cup 2017 can lay claim to being the most competitive and unpredictable in the tournament’s 63-year history with this week’s semi-final match-ups featuring giant-killers Fiji and Tonga against Australia and England.

New Zealand has played host to seven RLWC2017 matches in four venues – Auckland, Christchurch, Hamilton and Wellington – including two quarter-finals and tomorrow’s semi-final, with the winner of the Tonga-England clash to play the winner of tonight’s semi-final in Brisbane between Australia and Fiji next weekend (2 December in Brisbane).

“The scenes at our venues have captured the hearts of the public. This five weeks has been another great showcase of New Zealand’s ability to host big international events.”

Almost 500,000 fans in New Zealand watched the live broadcast of the historic showdown between the Kiwis and Tonga. Tonga won 28-22 in a thrilling encounter; the first time a second-tier nation has beaten a tier-one nation.

More than 6 million people in Australia have watched the broadcast of the World Cup to date on the screens of Seven, and a further 10.9 million live streaming minutes.

Millions more have watched the tournament across the 150 global television markets broadcasting the RLWC2017.