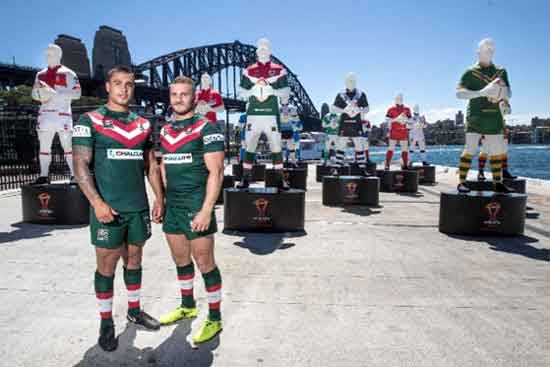 “Unprecedented media coverage of the Cedars’ World Cup campaign will lead to increased support at all levels,” claims Lebanon Rugby League Federation president Mohamed Habbous, after the side made the quarter finals for the first time, thereby ensuring their qualification for the next tournament in England in 2021.

“After the first-up pool win against France in Canberra they took significant notice,” added Habbous, who hails from Tripoli, north Lebanon. “We’ve been trying to tell them how strong the team is and how powerful a tool it can be to unite the country and they really saw that after that result.”

Before departure to the tournament, LRLF directors Sami Garabedian and Nayef Abisaid appeared on four lengthy TV features with broadcasters OTV, LBC, New TV and Al Manar. LBC and MTV have had reporters in situ following the campaign, and the country’s print media has provided extensive coverage of a sport it has become increasingly familiar with over the past 15 years. All the major radio stations have kept their listeners updated of the historic progress.

In-depth features have also appeared on the BBC, BBC Arabic and in UK newspapers The Times, Guardian and Daily Telegraph, and then Lebanese prime minister Saad Hariri tweeted his congratulations following the France victory. The Lebanese fans, in Sydney in particular, made further headlines bringing colour, noise and atmosphere to the games against England and Australia, whilst the nation was on the edge of its seat as the gallant Cedars just went out to Tonga in Wellington.

“We started getting lots more requests from various outlets,” continued Habbous, who played for Balamand university in the LRL competition. “We need to consolidate our position now by driving home how professional the organization is on limited funds and what we’ve accomplished in the name of the country. It’s beyond parallel compared to any other federation here. We can now compete proudly against nations who we could only dream of playing in other sports.”

Minister of State Pierre Raffoul officially represented the president of the republic along with the ambassador and consular general at the match against the Kangaroos, and increased government support is one of the LRLF’s targets, in addition to retaining strong links with the Lebanese-Australian community.

A number of companies are speaking to the LRLF to support multi-year development projects in Lebanon, including funding youth academies and affirmative action to use rugby league players to ensure talent and leadership remains there rather than emigrating.

“We hope that we have made them proud. Their support means so much to us, without it we couldn’t have done as well as we did. They allowed us to focus on the rugby side of things and we hope their continued support in the future will lead to even better results. We aim to keep the same level of excellence and standards in all our upcoming events, especially the mid-season international just announced against fellow quarter finalists Papua New Guinea.

“We’ve also learned so much about relations with the Australian-Lebanese community. Our mission remains to promote rugby league so that it contributes in some way to the betterment of Lebanon’s civil society.”