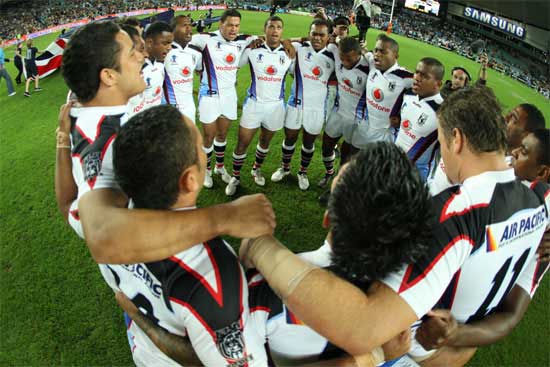 Old semi-final foes Australia and Fiji will go head-to-head in the Brisbane semi-final on Friday.

In the past two World Cups the Bati and the Kangaroos have met in the knockout stages, with Australia victorious, and they will make it three meetings from the past three tournaments this weekend.

Mal Meninga has named an unchanged 17-man squad from the team that thrashed Samoa in Darwin. Michael Morgan has kept his spot in the number 6 jumper alongside Cooper Cronk.

Mick Potter has also named an unchanged 17-man side from the outfit that edged New Zealand 4-2 in Wellington. Fiji showed tremendous poise and determination to see off the Kiwis in a close battle.

The question remains though whether they can back that performance up and beat the world champions. Australia have let in only two tries in this whole World Cup and Fiji has never defeated them.

They put Samoa to the sword 46-0 by hardly breaking a sweat. Valentine Holmes bagged five tries and Morgan is starting to look comfortable alongside his Queensland compatriots Cronk, Cameron Smith and Billy Slater.

Fiji will need to produce an even bigger upset to shock the Kangaroos. The green and gold might know they are favourites to book their spot in the final but winger Dane Gagai is expecting a difficult semi-final.

“We know we are coming up against a very confident, passionate and athletic side,” he said.
“They have some great individual players and if they all come together as one it is going to be a nice battle. Vunivalu … is an outstanding athlete. He has the physical makeup and the attitude to go with it, because from what I hear he works hard.

“He’s aggressive, a big human and has that X-factor that most Fijians have where they can create something from nothing. To see blokes that big move as fast as they do and be as agile as they are, that’s what blows my mind.
“That goes across the board. So we can’t just watch out for one because they have a lot of players who can strike from nowhere. The first [international] game I played against England was up there with the toughest games I have played and I am expecting an explosive start against Fiji.”