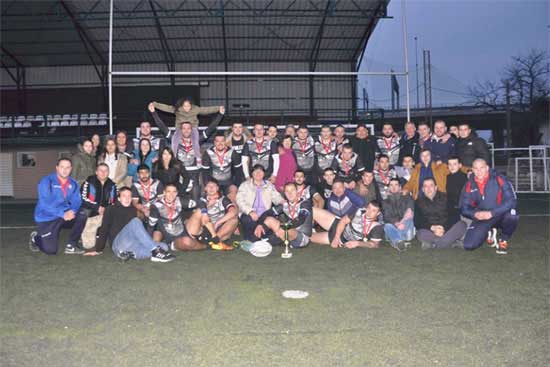 The honours have been shared as the Serbian rugby league season comes to an end, after Partizan held on to defeat rivals Red Star 32-26 to win the inaugural, regional Balkan Super League title, at the FK BASK Arena in the capital city, in the second ‘battle of Belgrade.’
The competition, which is scheduled to expand in 2018 with more nations and teams involved, also featured sides from Turkey, Bulgaria and Bosnia and Herzegovina.

The week before, for the second time in their history, Red Star became Serbian champions after defeating Partizan 44-22 in the SRL Grand Final, held at the Ada Ciganlija Stadium.

The Balkan Super League decider saw the lead change hands four times in the first half. But touchdowns from the competition’s leading try scorer, Vladimir Milutinović, and Branko Čarapić in five minutes in the lead up to the break – which established a 28-16 for Admir Hadžić’s Partizan side – turned out to be crucial.

Red Star’s fight back was too late, Brodie Feeney with a brace of touchdowns.

“It was a wonderful match and an amazing victory for us,” said Hadžić, who was carried shoulder high by his side. “The guys thought all week about what went wrong the previous Sunday and they played motivated from the start.”

SRLF general secretary and Balkan SL tournament director Slobodan Manak reflected on a highly satisfactory campaign. “Overall, including the inaugural season of Balkan Super League, Serbian clubs in both tiers of club competition played a total of 64 games,” he noted.

“It was important for the SRLF to strengthen club competition so that younger players have more chance to gain valuable experience and get quality matches, to prepare them for international tests and the next round of World Cup qualifying.

“That was the driving force behind the founding of the Balkan Super League, it was a challenging decision because of the increasing number of matches that clubs needed to partake in. This is now a semi-professional work load but it paid dividends because, for the first time, three teams equally challenged for the domestic title.”

Manak added: “Holders Dorcol started the season by winning the Super Cup but then their traditional dominance ended. Both Red Star and Partizan showed more during a season that had many surprising results, not least Radnicki Nis gaining historic wins against both Dorcol and Red Star.

“Partizan also won the Serbian Cup, led by the performer of the season, stand off Vladimir Milutinović, who is the leader in both points and tries scored.

“It was a hard and long season even though we didn’t have as many Test matches for our national team, which was the biggest difference from 2016. That’s why we composed a busy club schedule and the top Serbian clubs played as many matches as English or French second tiers sides, which is a great accomplishment.”