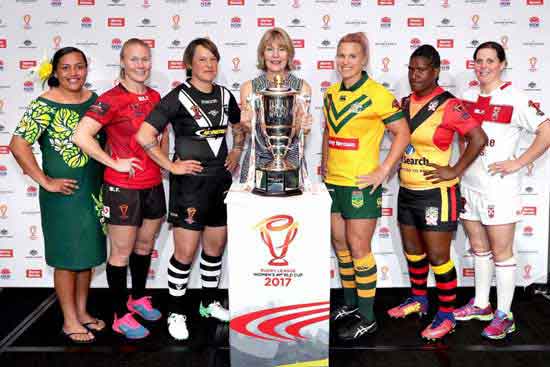 The Jillaroos secured their second victory of the World Cup with a commanding 38-0 thumping of England.

Ali Brigginshaw controlled the game beautifully for her side, having a hand in a majority of the points scored while also commanding field position with her wonderful kicking game.

England began the match on the front foot, but the Jillaroos brought the same attitude to their goal-line defence as they did three days ago and held out everything what was thrown at them.

A kick was put up on the fifth tackle but Isabelle Kelly positioned herself perfectly to take the catch and run 40 metres to get her side out of trouble. Kelly finished the job a few tackles later by barnstorming her way over the try-line in the left corner to open the Jillaroos’ account.

The next points also began in the Australian half, but no further tackles were required as Meg Ward found some open space and managed to throw a perfect offload to a supporting Brigginshaw, who then gave it off to the flying fullback Nakia-Davis Welsh who fended off a chaser to score under the posts.

Kelly and Ward were in the thick of the action once again as the former continued a nice right-to-left shift whilst onto the attack for her winger to score her first of the afternoon and increase their lead to 14-0.

When things are going your way, so does the bounce of the ball, and after Brigginshaw put in a deep kick, an obscure bounce allowed her to toe it through for Chelsea Baker to pick it up – after she and Davis-Welsh were ran onside – and score.

Kelly was brought down after a strong run while on the attack, but the defence was fractured as a result and Elianna Walton saw an opportunity to crash over for the Jillaroos fifth try of the afternoon.

The half finished with England on the attack after Kelly was put on report for a biting allegation, but they still could not crack the Jillaroos defence.

Australia began the second half in style after various players combined up the middle to make a 30-metre surge, and Brigginshaw took advantage of the backtracking defence as she passed to Kezie Apps who was never going to be beaten one on one.

England put pressure on the Australians for the next period of the match, but as they have for their entire campaign held strong defensively and let nobody through.

Moran stepped up to the plate on the hour mark with her trademark right foot step to burn through England, before another line-break by Kelly led to a simple try from dummy half by Ward on the ensuing play to bag her second.

Australia head into the third round of the group stages with an aggregate score-line of 96-4.

The Ferns ran in 14 tries in a near-perfect performance with speedster Honey Hireme crossing for six tries in a clinical display of rugby league.
Halfback Kimiora Nati put in another strong showing as she led her team around with her pin-point kicking game and combined strongly with halves partner Raecene McGregor, who crossed for two tries of her own.

Cook Islands enjoyed a promising opening stanza with their threatening attacking raids causing havoc for the New Zealand defence, but it was the Ferns who broke the deadlock with a right-to-left shift at the opposing end which gave Hireme the first try of the contest.

Hireme found open space in the ensuing set with a burst down the left-hand touchline, and a second try was looming for New Zealand but winger Atawhai Tupea couldn’t maintain possession in the opposite corner.

While the Cooks Islands were desperately searching for a quick reprieve, the Ferns were brimming with confidence and rampaging front-rower Lilieta Maumau extended their lead after she brushed off a host of defenders on her way to the try-line.

Kimiora Nati converted from in-front to take a 10-0 stranglehold after 20 minutes.

New Zealand continued their dominance with their forwards laying a strong platform through the middle-third, and Shontelle Woodman took full advantage as she added her name to the scoresheet just moments later.

Nita Maynard was providing significant impact off the bench with some darting runs out of dummy-half, and a break through the middle was finished with a quick play-the-ball for fellow interchange player Krystal Murray, who crossed for their fourth try.

Hireme and Woodman were causing trouble for the Cook Islands right-edge defence as they combined for three tries within a relentless five minute period, with Hireme grabbing her hat-trick courtesy of a some brilliant inside play from Woodman.

Murray was denied a second try in the closing stages of the first-half, but it made little difference as the Ferns dominated proceedings to take a 38-0 lead at the break.

New Zealand five-eighth Raecene McGregor split the defence in the early exchanges of the second-half and was brought down just metres out from the try-line, with Hireme capitalising on the broken defence and crossing for her fourth try of the game.

Hireme eventually grabbed her fifth try after being previously denied by the video referee with Nati unable to convert as the Ferns took a 48-0 lead after 50 minutes.

Fullback Apii Nicholls-Paulau was putting in another stellar performance with some evasive runs and tireless efforts from the back, and soon turned provider fro McGregor with a brilliant offload that put the five-eighth over from close range.

McGregor raced away for her second try off the following set before Maynard snuck her way over the try-line just five minutes later.

The Cook Islands were valiant despite trailing on the scoreboard as they continued to fight hard for valuable field position and were frantically scrambling in defence, but the left-side attack of the Ferns couldn’t be stopped as Hireme sprinted away for her eighth try of the tournament.

Murray scored her second try with a bulldozing run from 30 metres in the closing stages out before her team backed it up with some committed goal-line defence to hold out the Cook Islands and finish with a dominant 76-0 victory.

It was a proud day for Canada Rugby League, with the women recording their first ever World Cup victory to the tune of 22-8.
The brave side came out on top against Papua New Guinea in an incredibly physical match to close out the second round of the group stages.

After an impressive defeat in their first major hit-out three days ago against New Zealand, Canada brought that same resilience tonight in a game where they defended superbly.

Papua New Guinea were attacking in front of a vocal pack of supporters in the Monty Porter Stand, and they were treated to the perfect view of the opening try of the match when Christie Bulhage completed a right-to-left shift and barged her way over.

It was a tight tussle and very physical, but it would be Canada who would grind their way back into the match courtesy of Natasha Smith. The barnstorming centre crashed over for a double in the later stages of the first half to put their noses in front.

The physicality shown by both sides resulted in a couple of stoppages to treat injuries which was the only low point in what was turning out to be by far the match of the afternoon and possibly the match of the tournament so far.

Just as they did in the first half, PNG were first to score in the second when they received an offside penalty and took advantage of the gifted field position when another right-to-left shift was completed, this time by Martha Karl.

PNG spent the best part of 15 minutes on the attack, but the resilience of Canada saw them turn away what was thrown at them time and time again, with their goal line defence holding strong.

In what made the defensive clinic even more spectacular, Canada were disrupted when Natalie Tam was knocked unconscious while making a tackle and a long delay in the match saw her stretchered from the field.

That determination was rewarded with six points and a buffer of more than a converted try as after a few sets chipping away at PNG defence, Stevi Schnoor put in a perfect grubber that was pounced on under the posts by her halves partner Sabrina McDaid.

The physicality of the game was once again came at the detriment of the players when another had to be stretchered off the field.

Smith capped off a great match by scoring her third try of the evening in the closes stages, which secured the Canadians first ever World Cup victory.