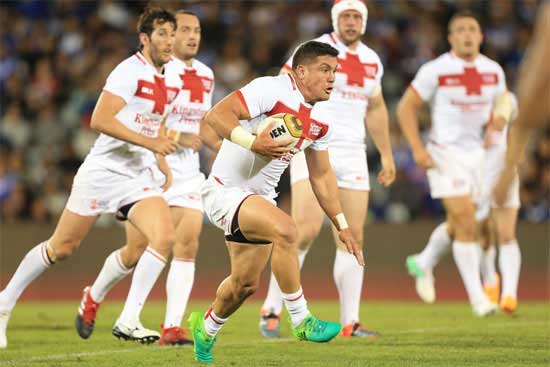 England have ended Papua New Guinea’s World Cup campaign and advanced to the semi-finals with a bruising 36-6 win in Melbourne.

England will play Tonga in Auckland after seeing off the Kumuls thanks to doubles from Jermaine McGillvary and Kallum Watkins.

But Wayne Bennett’s men will some need some time to recover after a physical afternoon. Papua New Guinea threw everything and the kitchen sink at their more fancied opponents but their ball-handing, not their effort, let them down.

The Kumuls lost skipper David Mead early when he collided with Luke Gale. It was a real blow as Mead could not return.

They should have taken the lead when Kato Ottio out-jumped Gareth Widdop for the ball but he knocked on with a try there for the taking. It was a costly mistake and England soon responded.

McGillvary got his first try easily with a quick shift to the right wing. England made it 8-0 in the 18th minute when a fantastic Kallum Watkins offload set up the winger for his second try.

Fourteen minutes later Alex Walmsley made it 12-0 when he powered over from short range. Widdop nailed his first conversion to make it 14-0.

The Kumuls error-count was proving a problem and then Ottio scored right before the break, but the try was correctly ruled out for a push off the ball on Widdop.

England were relatively safe at the interval and then Ben Currie scored early in the second half off a smart Widdop grubber. However, Papua New Guinea didn’t throw in the towel and Garry Lo grabbed a try in the left corner after a lofted Willie Minoga pass.

At 20-6 the Kumuls had hope but time was running out. England stepped up a gear to close the game out.

First Watkins grabbed a try – after he supported a great McGillvary line-break. Then Minoga got over the try-line, but it was denied by the video ref because of obstruction.

England struck soon after, after McGillvary set up Watkins again. The winger caught Gale’s bomb and his tidy offload put the centre over. Then right before full-time Ryan Hall rubbed salt into the wounds, with England’s seventh try, when he crossed in the corner.

A huge upset avoided, England go on to the semi-finals for an exciting clash with Tonga.