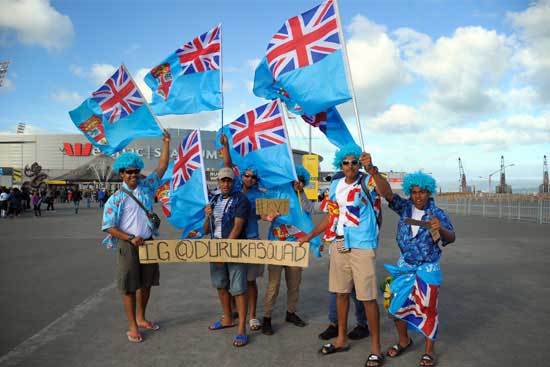 Fiji has sensationally knocked out New Zealand of the 2017 World Cup with a see-sawing 4-2 quarter-final win in Wellington.

After a gripping and tense match, the Bati will play Australia, in the semi-finals in Brisbane, just like they have in the past two tournaments.

The result caps off a terrible World Cup for New Zealand, who have failed to reach the final for the first time since 1995, and has included losses to both Tonga and Fiji. It surely has to be the end of coach David Kidwell’s short reign in charge of the Kiwis. If Kidwell does not resign he will likely be fired.

But for Fiji it was a fine moment, a slice of history, as they unseated one of the ‘Big Three’. The Bati now dare to dream as they get ready to face the Kangaroos in the Queensland capital.

It was tight opening half that Fiji dominated. They had 62% possession and made more than 300 metres with the ball than their opponents, but their execution at times let them down.

But only two points, a penalty difference from Api Koroisau separated the two teams. New Zealand were fortunate to be still within touching distance after what was the first tryless half of this World Cup.

In the second half Shanun Johnson levelled it up four minutes in with a penalty goal. Two minutes later Jordan Rapana was sin-binned for a professional foul as Fiji made a dangerous break.

They surprisingly decided to go for a try, and not a goal, and they ended up losing the ball in the next set. Fiji were soon presented with another good scoring chance when Roger Tuivasa-Sheck coughed up the ball on his own try-line.

After that error Fiji received a penalty. This one they kicked to vitally go 4-2 in front.

In the final 10 minutes both teams forced dropouts and Kevin Naiqama lost possession in his own life. The tension on both sides grew. But the Bati defence held and they did enough to keep New Zealand out.

At full-time it was the Pacific Islanders celebrating and the Kiwis wondering where it all went wrong.

It might have been a tryless game with plenty of errors, but it was edge-of-your-seat stuff for 80 minutes. Both teams lacked the killer pinch to kill it off but Fiji just did enough to get the win.

2-0 Fiji at half-time.
first tryless half of the world cup

46 big break by Fiji, Jordan Rapana sin-binned for pro foul.
Decide to go for try not penalty goal. But mistake and Fiji cough up the ball

73 Hayne kick forces a dropout.
76 Fiji error, Naiquama loses the ball about 40m from his line.
77 Johnson forces a dropout with a grubber
79 NZ get the ball with 32 seco left. Johnson kicks but no good