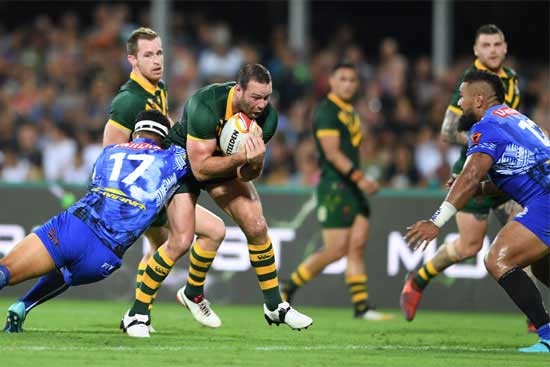 The Kangaroos have booked their place in the 2017 World Cup semi-finals after easily disposing of Samoa 46-0 in Darwin.

The match belonged to winger Valentine Holmes who crossed five times – an Australian test record – in the eight-try rout. Australia’s defence of their World Cup crown is on track as they made it four wins from four in the tournament.

Toa Samoa have bowed out on a disappointing note, with three losses and a draw, complete with a thrashing in the Northern Territory.

The green and gold will now face either New Zealand or Fiji in the semi-finals in Brisbane.

Holmes got the ball rolling in the ninth minute after some brilliant play from Josh Dugan. Cooper Cronk put up a bomb and Dugan tapped it back into the path of Holmes to score.

Dane Gagai got over the line seven minutes later, but he couldn’t get the ball down and the try was ruled out by the video referee.

Australia showed its lethal strike from anywhere on the field soon after when Holmes got his brace. The winger broke a few tackles, found Cronk in support who then passed back to Holmes for him to race away 80 metres to score.

Samoa couldn’t handle the Kangaroos’ clinical play and then Matt Gillett set up Billy Slater to score with a terrific offload.

At 18-0 it was getting worse for an error-prone Toa Samoa and then Matt Morgan danced and dummied past a few to grab the green and gold’s fourth try.

Four minutes later he had a double, as he grounded Cameron Smith’s brilliant kick in behind.

That made it 30-0 and effectively game over at half-time, a herculean score for Samoa to overcome in the Darwin humidity.

In the second half the Pacific nation put up more of a fight, and tried to crack the Kangaroos defence, but Australia still grabbed three more tries and conceded none.

Holmes bagged his fourth out wide after Tyson Frizell was held up over the line. His fifth came after a lovely break from Morgan, who passed to Cronk who had the winger in support to cross between the posts.