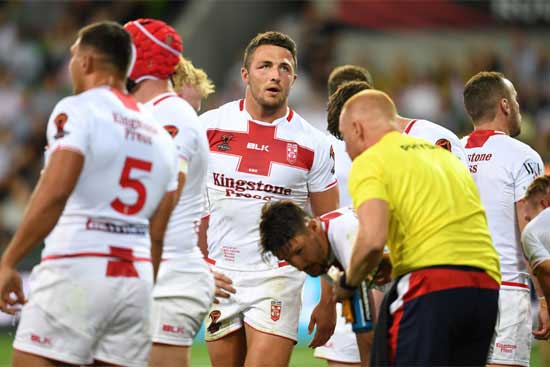 Sam Burgess has been selected in England’s run-on side to tackle Papua New Guinea in the World Cup quarter-finals.

The return of Burgess, one of the best players in the world, after two games out with injury is a huge boost for England in Melbourne. Jonny Lomax is still unavailable, so Gareth Widdop stays at fullback after his star turn against France.

Leeds pair Kallum Watkins and Ryan Hall come back into the side, after being rested on Sunday, but Kevin Brown has done enough to keep his place. Josh Hodgson also comes back in, with James Roby moving to the bench, as does Elliot Whitehead. Alex Walmsley, Tom Burges, Ben Currie and Roby make up the four-man England bench.

Papua New Guinea has had their own boost with the expectation that blockbusting winger Garry Lo is fit to play. The Sheffield flyer, who will be playing for Castelford against most of the England team in Super League next season, has been in devastating touch at this World Cup. Lo has shown he can score a try from anywhere and is like stopping a tank.

The Kumuls have dropped Lachlan Lam, after his two-try Test debut, with Ase Boas back to partner his brother Watson in the halves. Rod Griffin has moved to the bench with Willie Minoga moved into the second-row. Nixon Put and Thompson Teteh have dropped out of the 17-man squad.

Papua New Guinea have been outstanding in Port Moresby, blowing away Wales and the United States and edging Ireland. But here is where the real challenge begins for them. Without a parochial crowd behind them and the hot and humid conditions, can they dethrone England?

Papua New Guinea has done it before, famously against Great Britain in 1992, so it is entirely possible. England are certainly vulnerable, with Wayne Bennett seemingly unsure of what his best side is.

The Kumuls will need to add smarts and structure to their all-energy, passionate and powerful displays that have steamrolled their rivals so far. They will not have it as easy in the forwards as they did against the Welsh and Americans. It can they can topple England, like Tonga against New Zealand, it would go down in the history books.

England will look to grind Papua New Guinea down and come over the top of them in the second half. Weather the early barrage and then take them apart.

Prop Scott Taylor knows his team is in for a real battle.

“You just can’t give them much ball. Obviously we were sloppy in the second half against France and you can’t do that against teams like PNG, they’ll put us to the sword. We have to have a good week defensively training and get our D tight and look after that ball. Take a good solid arm wrestle into them. If we can keep on completing we should be alright.”