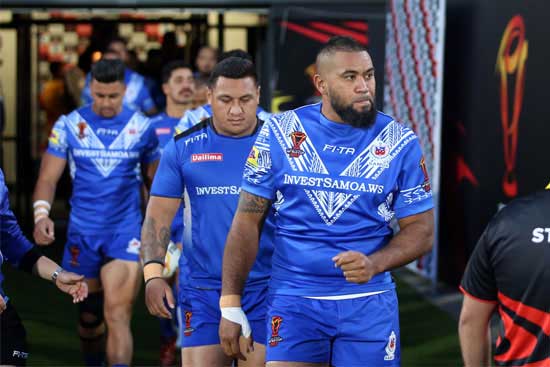 The pair, who were both born and raised in western Sydney, missed the Scotland encounter but are back to face the Kangaroos. For the green and gold Michael Morgan has won the race to partner Cooper Cronk at 6, beating Cameron Munster and James Maloney.

The Australian side has a familiar look, after two games of experimentation, with 16 of the 17 that defeated England in Melbourne selected to meet Samoa. Regan Campbell-Gillard is on the bench, after Jake Trbojevic’s injury, with three other forwards. Cronulla’s Wade Graham will be required to fill the utility role.

For the Polynesian country coach Matt Parish has made several changes after the disappointing 14-14 draw with the Scots. Ricky Leutele has moved from the wing to the centres, with Tim Lafai moving from the centres to the wing. Fa’amanu Brown has made way for Roberts and has been named on the bench.

Manly forward Frank Winterstein has missed the cut with Leeson Ah Mau getting the nod. Brown takes Pita Godinet’s utility spot on the bench and will be joined by Bunty Afoa, Suaia Matagi and Jospeh Paulo, with Sam Tagaetese not selected.

Samoa have been dismal in the World Cup so far, with losses to New Zealand and Tonga, and were lucky to share the spoils with the Bravehearts. They are quite lucky to even reach the knockout stages and will need to do something extraordinary to knock off Australia.

The Kangaroos have not been their ruthless, clinical best yet at this tournament but have still won all their games and should have too much class for Toa Samoa.

Will Chambers will make history on Friday when he becomes the first Northern Territory product to play a Test in the city. The Melbourne centre has been looking forward to the game all year.

It will be very emotional for me,” he said.

“I lived 1200km from here and to be playing in a World Cup quarter-final up here is something special. It’s something you wouldn’t have even dreamt of.

“I never would’ve thought a rugby league match of this importance would be played in Darwin. But to be up here and playing in it is something special and great to see the game’s come along so far.”