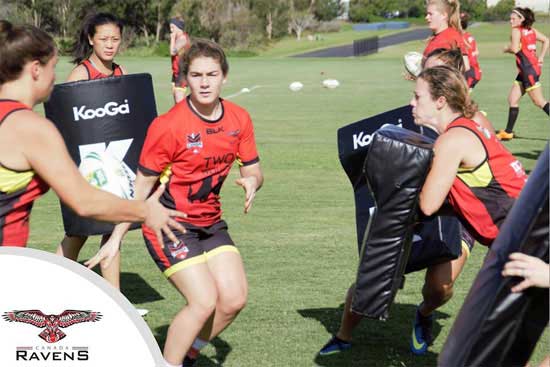 If there was a prize, an award, or some kind of general acknowledgement for raw enthusiasm then the Canada Ravens would be a slam dunk to win it.

The Canadians are preparing to make their international debut at the Women’s Rugby League World Cup and to say they are revved up and raring to go just wouldn’t do them justice.

The thing that’s most remarkable about this team being at #RLWC2017 is that Canada only found out in September of last year that it had been approved to send a team to compete in Australia. And maybe even more amazing than that is that up until a few months ago, women’s rugby league didn’t even exist north of the 49th parallel.

Kudos to the Canada Rugby League Association (CRLA) for having the foresight to follow-up on the opportunity which was first mentioned in passing during the men’s RLWC Americas region qualifiers in Florida back in 2015.

The Rugby League International Federation took its time and waited until literally the last minute before signing off on it, but the Canadians have taken the bit between the teeth and are upbeat about what lies ahead.

A final squad of 24 players was picked after numerous try-outs and inter-provincial games this past summer and they, along with their coaching staff, arrived on the Gold Coast last week for final practices.

A big chunk of the squad, in fact just about all the players, have rugby union backgrounds. Many have represented Canada at Test level in rugby, while others have competed at Rugby World Cups, as well as Sevens World Cups and the 2016 Rio Olympics.

This team may be inexperienced when it comes to rugby league, but make no mistake, it is not a team of slouches. The players are very competitive and enthusiastic.

“You know what, the learning curve has been super steep for everyone here,” Stevie Schnoor, one of the more experienced players on the team, told RugbyLeagueplanet.

“Rugby League is just something different. The strategies are different, the game plays are different and every single girl on this team is falling madly in love with this game.”

Aside from her rugby background, Schnoor also plays in the Legends of Football League in the United States and was on the Seattle Mist team that recently won the national championship.

She says the Ravens aren’t daunted by the prospect of having to play against well-seasoned nations like Australia and New Zealand.

“We have nothing to lose, it’s on them,” she continued. “We’re under-ranked, people have never seen us play, I like the position we’re in. I think the athletes on this team are some of the best in the entire world and I’ve no doubt we’re going to go out there and compete with these teams.”

A member of the squad’s leadership group, Kathleen Keller, echoes those sentiments. Another former national team rugby player, she is the only woman from the province of Quebec to make the squad and is relishing the opportunity afforded her.

“All in all, it’s a pretty cool experience and it’s a really interesting challenge to have so late in my career,” Keller said.

“I wanted to try something new and it was an opportunity that came up. I had a crack at it and it worked out.

“Most of us come from elite sports backgrounds, so we’re used to high level sport. We are competitive people and we do hope to do well.”

It will be a baptism of fire for Canada as WRLWC organizers haven’t cut the Ravens any slack in scheduling their opponents.

They face New Zealand first up, then Papua New Guinea in the second round, before taking on the Australian Jillaroos in their final crossover Pool match.

In their only WRLWC warm-up game, Canada lost 38-12 to a Queensland Maori side Friday night at Southport on the Gold Coast.