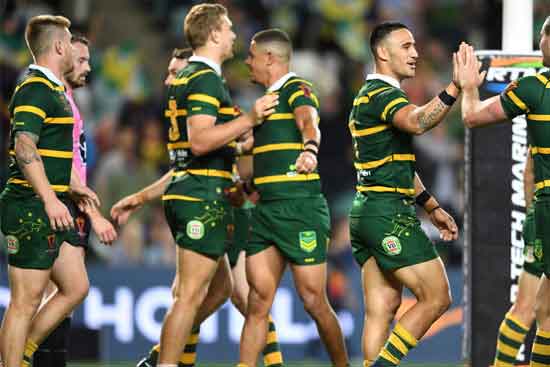 Overview: On Friday night the spotlight turns to Darwin as the 2017 Rugby League Quarter Finals get underway. Australia who finished top of Pool A take on Toa Samoa who finished third in Pool B.

The Australian Kangaroos are so far undefeated going into this Quarter Finals clash after defeating England 18 – 4, France 52 – 6 and Lebanon 34 – 0. Expect Australia to field their strongest possible side for this match as they build towards the Rugby League World Cup final. If Australia win they will book a Semi Final place at Suncorp Stadium Brisbane against either New Zealand or Fiji.

Toa Samoa have failed to register a win so far during the Rugby League World Cup tournament going down to New Zealand 38 – 8, Tonga 18 – 32 and finishing with a shock 14 all draw against Scotland. Samoa will throw everything at the Kangaroos in this sudden death game. Don’t rule Toa Samoa out, as we have seen so far in the RLWC2017 anything can happen and Samoa have plenty of passion.