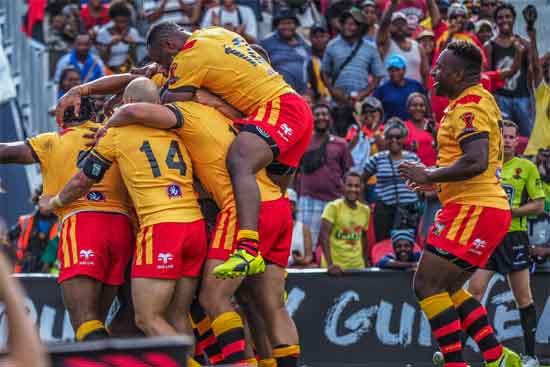 Papua New Guinea has sealed its spot in the quarterfinals of the Rugby League World Cup with a big 64-0 victory over the United States on a hot and breezy Sunday afternoon in Port Moresby.

It was the first time the two countries had met in a rugby league international and the result clinched a clean sweep of the Pool stages of the tournament for the Kumuls.

It was also another sellout crowd at the Oil Search National Football Stadium, the third straight for the home team.

The game opened with PNG threatening right from the get go when they regained possession from a kick on the end of their first set after a USA player had touched the ball, but desperate defense by the Hawks kept their tryline intact.

Continued offensive pressure by the Kumuls finally paid dividends when five-eighth and debutant Lachlan Lam scored the first try of the game in the eighth minute. He was put into the open by James Segeyaro after the hooker had made a clean break. Backrower and goalkicker Rhyse Martin got the extras for a 6-0 buffer.

It wasn’t long after before PNG was in again, this time right wing Justin Olam dotting down in the corner. It came off an American mistake when the restart kickoff had been booted over the dead ball line.

Martin missed the conversion, but it didn’t really matter because from the restart the Kumuls made another clean break to send Segeyaro into the open to score under the posts. This time Martin was on the money to set up a 16-0 lead in as many minutes.

PNG were unstoppable, and Lam went in for his second try from the restart after breaking a tackle and sprinting to the try zone. Another Martin conversion made it 22-0 as the match closed in on a scheduled drinks break at the end of the first quarter.

The Hawks showed precious little offensive enterprise when they had the ball, although that’s probably because they spent most of the second quarter on defense and PNG made them pay.

The men in yellow and black notched further tries by Rod Griffin and Stargroth Amean, while Martin converted both to set up a 34-0 halftime score.

The story of the game was that Papua New Guinea was simply too strong in attack. They were able to bust tackles and when they found open space, they were away. Conversely, the USA couldn’t mount much pressure with the ball and was forced on to the backfoot all day long.

PNG opened the second half with a scorching try by fullback and captain David Mead, who picked up a rolling ball in his own red zone and raced it 80 meters for the score. Another Martin conversion stretched the lead to 40-0 and a repeat score of the Kumuls’ opening match against Wales looked to be a possibility.

True to his word, US coach Brian McDermott made sure every player on the Hawks squad saw some game time at the RLWC and in Moresby, Martwain Johnson got his chance in the second stanza.

However, the Kumuls kept piling on the pressure and that man Amean made another long-range break before offloading to halfback Watson Boas, who scored under the posts. Money man Martin was on target again to extend the lead to 46-0 as the second scheduled drinks break was taken.

Immediately after the break they were in again, this time Martin ran the ball before passing to center Nene MacDonald in space as they cracked the half century. Martin added more extras for a 52-0 scoreline.

It was now becoming a procession as Olam touched down for the second time in the game. A successful conversion from the sidelines made it 58-0 with around 12 minutes to go.

And as if to emphasize the point, US fullback Corey Makelim finally broke through and headed for the line only to be held up by Mead in the in-goal. Then PNG countered with a length of the field try by Olam, who bagged his hat-trick, as Hawks winger Ryan Burroughs pulled a hamstring in pursuit.

Martin again converted to push the Kumuls out to a 64-0 margin.

That’s how the game finished, the US being shut out for the second straight time at this World Cup and PNG qualifying for the quarterfinals.

Man-of-the-Match Lachlan Lam told Seven afterwards despite the final score, he thought the USA was a tough side.

“It’s hard to back up week by week after those sort of performances, but we knew if we got it right the scoreline would be in our favor.”