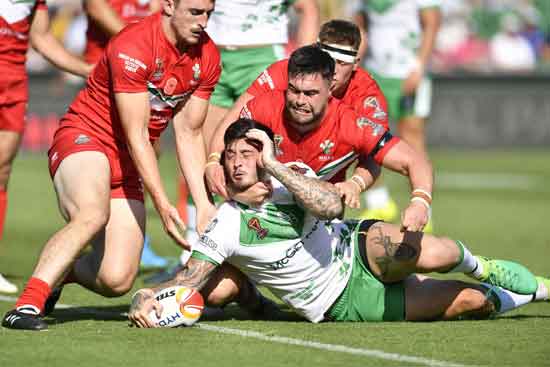 Ireland has handed Wales its third and final defeat in the 2017 World Cup with a dominant 34-6 victory in Perth.

The Wolfhounds finished their tournament on a high but will miss out on the quarter-finals, after two wins and a loss, with Papua New Guinea going through from Group C to face England.

Ireland took the lead in the eighth minute thanks to Michael McIlorum. The Wigan hooker darted from dummy half, drew the defence, and put Api Pehwhairangi over for the first try.

The Irish lost halfback Joe Keyes in the 21st minute to a knee injury.

Three minutes later Wales almost hit back, when Regan Grace crossed in the right corner. But the winger’s foot was in touch and there was no try given.

That was as good as it got in the first half for the men in redwith Oliver Roberts forcing his way over for the second Irish try on 31 minutes.

Next it was Joe Philbin’s turn to brush off some soft defence and score under the sticks.

Wales were reeling and getting overrun around the ruck from some strong Ireland carries.

Finn nailed his third conversion and then right before half-time he got a try of his own. After a Scott Grix break, the playmaker went through some very weak tackling to touch down.

He couldn’t add the extras, so Ireland took a commanding 22-0 lead into the break.

In the second half the game petered out, both teams struggling to hold on to the ball and build field position.

As the sun bore down the error count rose. Wales started to come back into and were rewarded with their only try.

Josh Ralph threw a lovely cut-out pass in the 58th minute and Ben Morris crawled over.

Courtney Davies added the conversion to make it 22-6.

Roberts nearly got his second four-pointer of the afternoon, but it was ruled out for a knock on as he grounded the ball.

But the forward would not be denied and in the 66th minute he picked the ball up from dummy half and barged through.

With six minutes left Liam Kay also got the scoresheet after he finished off a set backline play.

There would be no final flurry for Wales as they bowed out of the World Cup.