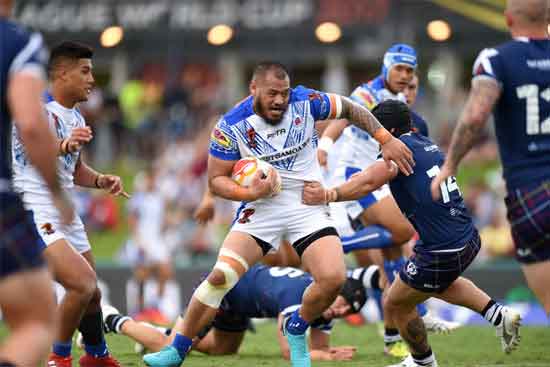 Win and you advance to the money rounds, lose and you go home. That’s what was on the line Saturday in Cairns when Samoa faced Scotland in a sudden death Pool B matchup in the Rugby League World Cup.

No captain Frank Pritchard and no Ben Roberts for the Samoans, while Scotland was also without their skipper Danny Brough, who was one of three players sent home during the week for misconduct.

In the end, it was Toa Samoa who emerged to fight another day earning a quarterfinal berth, but not because they won. The game finished in a 14-14 tie.

The match that most pundits had pegged as an easy win for Samoa turned out to be anything but on a warm, though gloomy afternoon in Far North Queensland.

The Scots started confidently with solid opening sets and surprised everyone by being the first to score inside five minutes when fullback Lewis Tierney pounced on a bouncing ball from a chip kick into the Samoan in-goal. Five-eighth Danny Addy was good with the conversion to give Scotland an early 6-0 lead.

After that wake-up call, the Samoans built some sustained pressure which resulted in big Junior Paulo crashing over for his first try in his country’s colors six minutes later. The points after by Matthew Wright were successful to tie up the game at 6-6.

Scotland edged in front again 8-6 in the 18th minute when Addy booted a long-range penalty goal after a Samoan infringement in the ruck.

Through the first quarter of the game, Samoa was flat and couldn’t find their rhythm and frustration started to surface as they gave away needless penalties via cheap shots.

Their frustration heightened when they inadvertently turned over the ball in a tackle in their own red zone with back-rower Frankie Mariano saying thank you very much as he took it in for the unlikely score. Addy again slotted the conversion to see the Scots skip out to a 14-6 lead.

The Bravehearts continued to dominate territory and possession for the remainder of the half, although the Samoans had a chance to score just before the break with a midfield bust, only to throw a forward pass with the last pass of the movement to snuff out any further scoring in the period.

The rain came down to usher in the second half and a different mindset for Samoa after a spray from coach Matt Parish and in the 48th minute right winger Wright managed to plant the ball in the far corner after mounted pressure. He couldn’t convert his score though, leaving the game at 14-10 in Scotland’s favor.

It was an arm wrestle through the third quarter as handling got difficult because of a slippery ball and a wet underfoot, but Toa Samoa kept pounding away and that tactic paid off in the 65th minute when fullback Young Tonumaipea crossed out wide to tie the scores at 14-14. The conversion attempt was wayward, leaving the game locked up again.

A strip in the tackle by Samoa in the 73rd minute gave Scotland a penalty almost right in front 40 meters out, but Addy missed the shot at goal sending the game into the closing stages still tied up.

An attempted drop goal by Scot Oscar Thomas a minute later also missed, as did another monster attempt by Addy in the 79th minute and time ran out with the game ending in a 14-14 deadlock.

The result means Samoa goes through to the quarterfinals because of a better points differential than Scotland.