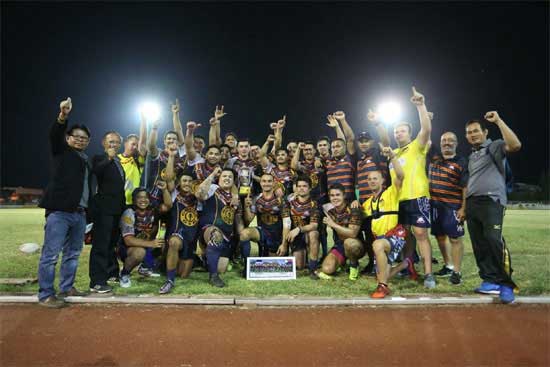 As the Rugby League world focuses on the World Cup being played in Australia, New Zealand and Papua New Guinea. Hungary and the Philippines travelled to Thailand to compete in the “The Gathering of Rugby XIII Nations Tournament”! A reminder that “The Greatest Game of All” is played in more than the 14 countries present at the World Cup.

“Every player stood up to the occasion, I was very pleased with our defence, to keep Hungary scoreless shows how committed our players were for each other, Hungary had plenty of opportunities to score but we kept turning up for each other”.

“I thought our halves Sheedy and Russell really steered us perfectly around the paddock, it’s really hard to just single out one player but Richard Goodwin was outstanding from fullback, he is just a great competitor”

Two days later on Wednesday the 8th of November the Philippines backed up to play Thailand in what was also the 3rd Asian Cup match between the two countries. The Tamaraws repeated their dominance of the tournament winning 64-2

“The Mighty Tamaraws have won the Asian Cup beating Thailand 64-2 in tonight’s clash at Mahasarakham Institute of Sporting Excellence,Thailand.

The mighty Tamaraws raced out of the gates taking an early lead in the first half leading 38-0, thanks to 3 tries to Will Grooms.

“We were very clinical in the first half, completing nearly all our sets, our forwards really set the platform, and all were outstanding tonight.

“Max Power and Steve Bernstrom led from the front giving our edge players plenty of attacking shots, Marc Russell and Will Grooms formed a great combination on our left edge”.

“The definite stand-out play of the night belonged to James Osias who made his debut alongside powerhouse front rower Al Tesoro Jr who both became the first players selected out of our Estepa Elefante Cup competition in the Philippines. James bagged the last try of the night and his raw emotion after scoring was a scene that needed to be witnessed to capture how much it means to represent the Philippines”.

“This was a totally new and different experience for me since I played alongside veterans. Their level of professionalism and respect can’t compare to the others. I admit that I struggled learning their plays since they were new to me. Their standard was high requiring strength and agility. I learnt everyday along the tour. My team mates were kind and accommodating to debutants and thanks for my kuya’s patience. I learnt a lot from them and I will treasure the memories until I hang up my boots.”

Manila Storm James Osias reflected on his first try for the Philippines:

“When I scored my first international try I became very emotional and could not stop crying and shouting with all my heart that I am Filipino and I can do it. When I first stepped on the field I felt intense but I did not think of it because I always thought that I am representing my country and I wanted to give my best for the Philippines. I learnt a lot from this tour and I will always bring the Tamaraws way into my life. Very unusual experience I will never forget everything. Thank you very much.”

PNRL Vice President Paul Sheedy would like to thank our sponsors Golds Gym Philippines, Max Power Electrical, Exerstend and all our wonderful supporters and the host nation Thailand for their warm hospitality and the opportunity to promote and develop Rugby League in their country and spread “The greatest game of all” in Asia.