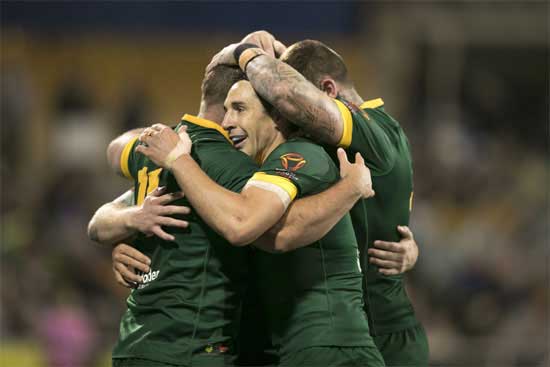 Australia is set to make it three wins from three when they meet Lebanon in the World Cup in Sydney.

The defending champions have accounted for England in Melbourne and France in Canberra with relative ease. Now they meet the Cedars, captained by former Kangaroos hooker Robbie Farah and coached by Kangaroos great Brad Fittler, in their final Group A game.

Australia should have no problems taking apart Lebanon, who are ranked 19th in the world. The Middle Eastern nation have a handful of NRL players, including Farah, Michael Lichaa, Mitchell Moses and Tim Mannah, and sprang an upset over France but are mostly made up of part-timers.

There is an air of familiarity about this game, despite the two countries having never played each other before, with most of the Cedars’ squad born and raised in Australia. Both Farah and Mannah have played State of Origin and represented the Kangaroos. Farah and Aussie skipper Cameron Smith are old rivals at NRL and Origin levels, and once fought it out for the green and gold number 9 jersey. Fittler and Australia coach Mal Meninga were once teammates on the international stage.

Meninga is rotating his squad with all players given a chance to shine before the knockout stages begin. He has rested Billy Slater, with Valentine Holmes getting the nod at fullback. There is a new centre partnership with Cameron Munster and Tom Trbojevic.

James Maloney has returned in the halves alongside Cooper Cronl, while Matt Gillett and Boyd Cordner are all back in the run on XIII. Former Lebanon Test player Josh Mansour will play on the wing and is relishing taking on his heritage country.

Mansour ruptured his ACL in the Four Nations last year and is savouring his first World Cup experience.

“I hold it so close to my heart. I think in rugby league it’s the best opportunity you can have. To play for your nation is obviously very special,” he said.

“To get back in this squad when I thought my season was over this year, as I hadn’t played much this year, I didn’t think my chances were very high. So I’m very lucky and very privileged to be here. World Cups don’t come up very often – once every four years – so very happy.”

Lebanon have also made changes with Anthony Layoun and James Elias coming into backline, and Chris Saab returning after his concussion suffered in the warm-up before the France match.

“The thing I’ve noticed in the team is they believe in themselves,” he said.

“They believe they can beat them all.”