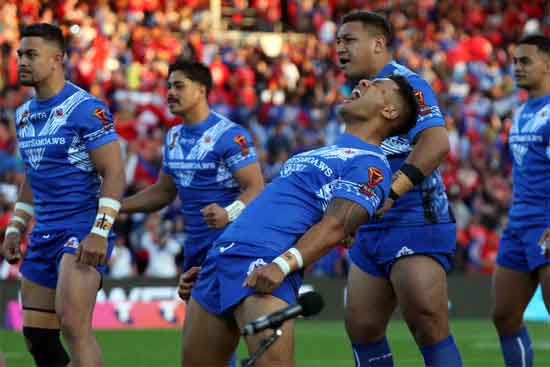 Samoa will start as heavy favorites to beat a depleted Scotland in their final Pool B matchup at the Rugby League World Cup.

The two are set to square off in Cairns Saturday with the winner securing a place in the quarterfinals.

The Scots will field an understrength side following three of their players being sent home from #RLWC2017 this week for misconduct.

Captain Danny Brough, Sam Brooks and Johnny Walker were all deemed to be too drunk to board their plane in Christchurch, New Zealand.

The Scotland Rugby League said it expects everyone involved in Scottish Rugby League to adhere to the highest standards of behavior and these guys didn’t.

Both teams are 0-2 going into the contest. In the so-called Pool of Death, Samoa has lost to New Zealand and Pacific archrivals Tonga, while Scotland was totally dominated by the Kiwis and Mate Ma’a.

Not that it will really matter in determining who advances to the playoff rounds, but Samoa’s points differential is -44 compared with Scotland’s differential of -114.

Despite their losses, Toa Samoa has played some enterprising football at times while remaining competitive and haven’t been blown away.

Sadly, the same can’t be said for the Scots who have been completely outplayed in their two matches to date.

Expect the likes of Frank Winterstein, Joseph Leilua, Herman Ese’Ese, Josh Papalii and Junior Paulo to lead the charge for the Samoans as they set their sights on qualifying for the knock-out rounds.