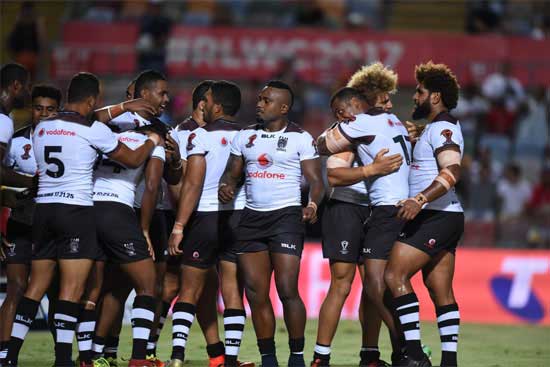 The Rugby League World Cup moves into the final Pool stage this weekend with quarterfinal spots on the line.

In Pool D, Fiji takes on Italy Friday in Canberra and the Bati are in the driver’s seat for this one.

The Fijians are 2-0 having earlier dispatched the United States and Wales, racking up more than 50 points in each game.

The Azzuri, on the other hand, are 1-1 having been surprisingly beaten by a fired-up Ireland in the first round before bouncing back to shut out the USA at the weekend.

Based on those results alone, Fiji would be red hot favorites to win, particularly as their points differential of +112 is much better than Italy’s at +22.

Should the Italians happen to come away with a victory, both teams would have the same overall records, so it would then come down to which team has the better points differential. But given that Italy needs to win by 91 points to finish above Fiji, even the staunchest Azzuri fan would concede that is extremely unlikely.

On paper, Fiji has a stronger lineup based on their squad being loaded with NRL players and as they have already shown in their first two matches, that really helps.

Italy also has some NRL’ers on their squad, just not as many.

The Italians will be boosted by the inclusion of Terry Campese at five-eighth after he missed the first two games to enable him to recover from a calf injury. That allows James Tedesco to go back to fullback, but will that be enough to cause an upset? Conventional wisdom suggests probably not.

On the flipside, Fiji, whose first goal from the get go was to win the Pool, has been virtually unstoppable to date.

Captain Kevin Naiqama has led by example and has been well supported by the likes of Suliasi Vunivalu and of course the Hayne Plane. The latter now leads the World Cup try-scoring count with 14.

They have also amassed more points than any other country in the first two rounds and have scored more tries than anyone else so far.

Before the tournament started, Fiji head coach Mick Potter said the squad would be focused and after two games there’s ample proof that they still are.

“There won’t be anything special, just working hard at training making sure we are prepared to play our best,” coach Potter told RugbyLeaguePlanet

“Our confidence level is good.”

And why wouldn’t it be? The Bati are on track to repeat their achievements of 2008 and 2013, when they made the semifinals, and maybe go one better this time.