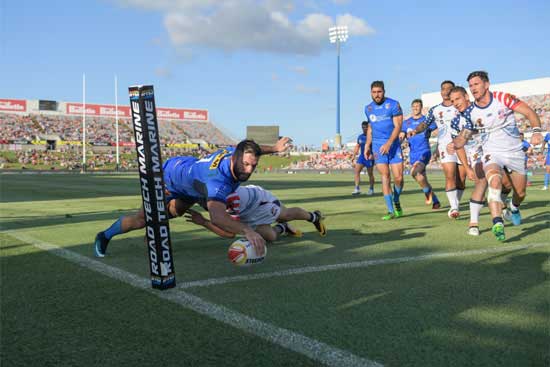 In what was a must-win game for the Ranked #10 USA Hawks, the Americans have been shut out 46-0 by Ranked #12 Italy in a match that belied the effort they put in at the Rugby League World Cup.

It was the USA’s second worst drubbing at the RLWC since their 62-0 blanking by Australia in 2013. Played at 1300Smiles Stadium in Townsville Sunday, the Italians got on a roll early and were never headed.

For Italy, Terry Campese was ruled out, while James Tedesco moved to five-eighth from his favored position of fullback.

The Hawks opened in confident style being physical in their first two sets and forcing two early Italian turnovers, but it was the Azzuri who scored first in the seventh minute when hooker Joe Tramontana juggled a baubling ball off of a kick to ground it in the in-goal. Winger and goalkicker Josh Mantellato converted for a 6-0 Italy lead.

Seven minutes later, after the Hawks had squandered an opportunity on the wing when Philadelphia Fight’s Gabe Farley coughed up the pill, Tedesco showed good skills to dance his way through some US defenders to cross for the Azzuri’s second try. Mantellato kicked the extras for a 12-0 scoreline.

A short four minutes after that and the Italians were in again when Mantellato crashed over out wide after a timely offload by his skipper Anthony Minichiello. He couldn’t convert his own try, so the score remained at 16-0, their highest ever first half haul in a World Cup game.

By now the Italians were playing with a lot more confidence than what they had showed in the first round and scored their fourth try of the half through halfback Ryan Ghietti, who went in untouched. Mantellato was on the money with the extras to push the score out to 22-0.

Inside the last ten minutes, the Hawks had their best chance of scoring when fullback Corey Makelim was adjudged to have knocked-on right on the Italian goal line, although replays showed it should have been play on and an American try to Bureta Faraimo.

Makelim nearly did it again in the 35th minute when he set the crowd alight by breaking into the open field and regathering his own chip and chase before his second chip kick was charged down and Italy ran the ball back in the opposite direction with Tramontana finishing it off for his second try. Mantellato goaled to make it 28-0.

That was the halftime score, but on a positive note for the US, the first forty produced some good tackles by Matt Shipway and some probing runs by winger Ryan Burroughs. Several of the US players wore black arm bands to acknowledge those killed in the terror attack in New York City during the week leading up to the game.

As was the case the previous week, the Americans conceded an early try in the second half as Italy capitalized on another US knock-on close in resulting in Tedesco dotting down in the corner for his second score of the game. Mantellato kicked a booming conversion from the sideline to increase the led to 34-0.

An American fumble inside the Italian red zone gifted the ball to Tedesco, who sprinted towards the other end, but again showing their never-say-die attitude, the US chasers ran him down and snuffed out a try-scoring opportunity.

However, the seventh Italian try came in the 58th minute and it followed some slick passing involving several players started by Tramontana with prop Paul Vaughan on the end of the movement to score. Mantellato converted to make it 40-0 as the match moved into the final quarter.

Heartbreak for the gallant US side as Italian winger Mason Cerruto scooped up a loose ball in the 72nd minute and raced away untouched over 80 meters to score under the posts for an easy conversion by Mantellato and a 46-0 lead that ended up being the final score.

“It was a bit disappointing our defense, especially last week, and to pull that today was pretty good.”

One of the best players on the field for the United States was their workhorse fullback Corey Makelim, who said after the game that credit must go to the Italian defense.

“They’re a good opposition and we’ll just go back to the drawing board,” he said.

“I thought our boys did fantastic. You know, we didn’t give up and that was our thing, we don’t give up ever. I’m happy with my own performance, but it’s on to next week.”