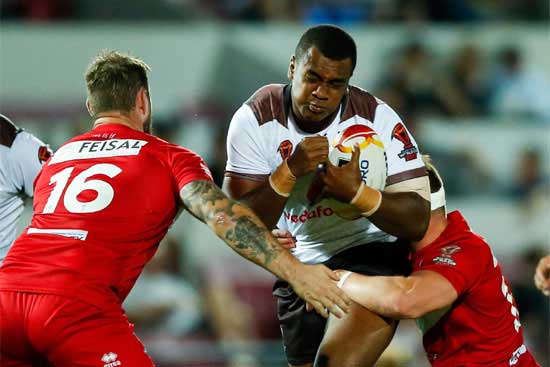 Fiji have handed Wales their worst-ever World Cup loss, smashing them 72-6 in Townsville.

A week after the Welsh were mauled by Papua New Guinea, the Bati inflicted more damage in a 14-try rout in front of 7,732 fans.

Fiji are on track for the quarter-finals, with a meeting with Italy in Canberra next, after another superb display. Suliasi Vunivali did most of the damage, grabbing a hat-trick, while Taane Milne and Viliame Kikua each got doubles.

It was a bright start for the Bati after five minutes when Eloni Vunakece touched down. But Wales hit back straight after, with a lovely Craig Kopczak offload put Morgan Knowles over.

That was as good as it got for the Dragons as Fiji put on the afterburners. The Pacific nation had 10 different try-scorers in total and the game was effectively over at half-time at 40-6.

Wales couldn’t handle the enviable mix of power, pace and strength of the big Bati backs or forwards. Fiji made metre after metre around the ruck as the Dragons struggled to slow them down. Mick Potter’s men didn’t clock off in the second half, posting another 32 points after the interval.

The score could have been even more if Fiji’s goal-kicking was more accurate.

Five-eighth Jarryd Hayne etched his name into history with another try, taking his all-time World Cup tally to 14, which puts him one ahead of Billy Slater and Bob Fulton.

Wales coach John Kear was a disappointed man after the match.

“Quality told, they were comprehensively better than us,” he admitted.

“If people play like that against you who are that big and skilful, you’re in bother. And we were in bother.

“The Welsh fans will be disappointed, but they’re not half as disappointed as the players and coaches are because there’s been a lot of work gone in this week and you feel like you’ve been kicked in the rocks to tell you the truth.”

Fiji thumped the United States 58-12 in Townsville in week one and are on track for a quarter-final showdown with either Tonga or New Zealand in Christchurch.

For Wales, they are off to Perth to face Ireland and try and salvage some pride. It has been an incredibly difficult World Cup for the Welsh, who have not won a tournament match since 2000