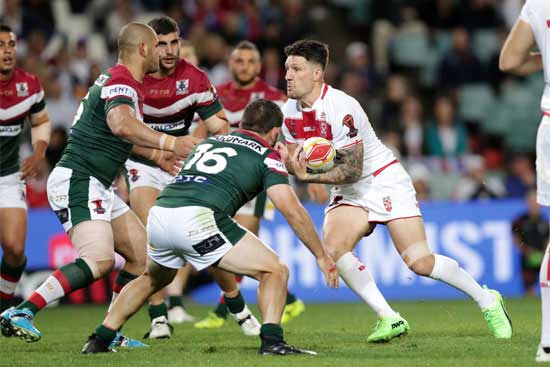 England has bounced back from its opening round defeat by Australia to post a 29-10 win against Lebanon in Round 2 of the Rugby League World Cup.

Played at the Sydney Football Stadium on a soggy Saturday night both teams opened up with solid sets, but neither was able to gain the ascendancy.

The English were the first to break the early scoreless deadlock when right center Kallum Watkins crashed over out wide in the eighth minute following a sustained buildup of pressure in the Cedars’ red zone. Five-eighth and goalkicker Gareth Widdop converted for a 6-0 lead.

Lebanon tied things up eight minutes later when backrower Nick Kassis pounced on a ball that Widdop fumbled backwards into his own in-goal. Mitchell Moses kicked the extras to lock things up at 6-6.

That momentum turned into points when right winger Jermaine McGillvary stepped inside the cover defense to run in and dot down under the posts. It was the sixth straight Test in which he has scored. Another Widdop conversion made it 12-6 after 25 minutes.

The English built on their momentum with a third try when left winger Ryan Hall touched down in the corner despite appearing to lose control of the ball in the process. The attempted conversion was wide to leave the score at 16-6.

England extended the lead in the 31st minute when backrower Ben Currie was put through a gaping hole in Lebanon’s defense by a smart pass by hooker Josh Hodgson. Widdop added the extras for a 22-6 scoreline and that’s how they went into the halftime break.

Within a minute of the resumption of play in the second stanza, England’s McGillvary was put on report following an alleged biting incident involving Lebanese captain Robbie Farah which followed a flare-up in a tackle.

The Lions enjoyed a good kicking game on the night turning the opposition around on numerous occasions and putting pressure on Lebanon in their own red zone.

Fifteen minutes into the half and big Tom Burgess stretched the English lead with a try that came on the end of a 25-meter run and step around the fullback. Another Widdop conversion kicked the margin out to 28-6.

England had the majority of possession and continued to put in good sets, forcing the Cedars to repeatedly work it out from their own end.

Lebanon was finally rewarded for its don’t quit attitude with a try by young right winger Bilal Maarbani in the 75th minute. The Moses conversion attempt missed to make it a 28-10 ball game.

And right on the fulltime siren, Widdop kicked a drop goal to seal a 29-10 victory.

England head coach Wayne Bennett said he thought his side was good, particularly in the first half, but not so much in the second forty.

“I was very pleased with our ball control and the way we played good field position on them and gave ourselves opportunities and thought we defended pretty well,” he said.

“I thought we just lost our way in the second half with the football particularly. I just thought we’ve got to do better than that.”

Lebanon’s coach Brad Fittler was full of praise for his team for their efforts.

“Under a lot of pressure, they used the ball, they supported each other really well and came up with some pressure passes.

“Our completions were good, and they defended their line against pretty good opposition. The second half was highly impressive.”

The only downside of what otherwise was an entertaining game was another disappointing Australian crowd, this time of around 10,237.