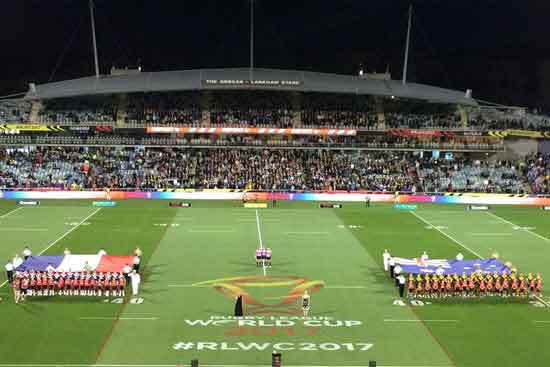 Australia has made it two from two in the 2017 World Cup with a 52-6 thrashing of France in Canberra.

In the Australian capital the Kangaroos were sloppy and stuttering in the first half, but peerless and powerful in the second as they notched a 10-try victory. The highlight was a four-try haul from NSW forward Wade Graham, with the Cronulla back-rower scoring three in just 31 minutes in the first half and then a fourth in the second period.

Billy Slater took his career World Cup tally up to 13 tries, equaling the record, when he crossed for Australia’s seventh of the evening, while his Melbourne teammate Cameron Munster got a double on debut.

But it was far from the perfect performance from the green and gold. For 40 minutes they huffed and puffed but could not put the plucky French away. The Kangaroos built a 20-6 lead at the interval and blew the European side away in the second half. However it was still an Aussie inconsistent display mixed in with mistakes and poor goal-kicking. They will need to improve as the tournament rolls on. France surprised with their commitment and dedication.

Australia coach Mal Meninga was full of praise for the committed French.

“I thought France were fantastic tonight,” he said.

“They gave us a bit of a battle. I was really pleased with the respect our players showed to the French. I would think their coach and their players would be very very happy with their performance. They’ll give the English a run for their money.

“The French played with great enthusiasm tonight,” he said.

“They didn’t stop trying. They’re a good footy side.”

France coach Aurelien Cologni said there was a big improvement from his team after their loss to Lebanon.

“I’m very proud of the effort,” he said.

“We can’t be happy with the score, but we’re happy with the effort. We changed a lot of things from last week. They have played like a team. We were strong in the middle. We never thought the game was lost. That’s a good thing for next week.”

France haven’t beaten Australia in nearly 40 years and weren’t expected to be at the races at all today. But Les Chanticleers can leave Canberra with their heads held high after staying with the Kangaroos for longer than most would have predicted.

Mark Kheirallah etched his name in World Cup history with a solo try for the ages. Kheirallah was born Sydney and grew up in Mascot.

? French fullback Mark Kheirallah turns on the jets for @FFRXIII in the first half.#AUSvFRA#RLWC2017 pic.twitter.com/TzkSZGTElT

He came through the Rabbitohs system and played one NRL game for the Roosters back in 2011. But the following year he headed overseas to join Toulouse Olympique, eventually becoming eligible to represent France through residency.

In the 22nd minute Kheirallah fielded an innocuous kick on his own try-line. There was nothing on. But the fullback picked up the ball, accelerated and showed great speed to fly nearly 100 metres and score a sensational try. It was a four-pointer that was live long in the memory.

It was a night when Kheirallah and Graham caught the eye. Only Gordon Tallis has ever crossed for four tries in one game for the green and gold. The Aussies move on to bigger and better things with Lebanon next. For France the old enemy, England, awaits in Sydney. Despite defeat, the Europeans head north with a spring in their step.