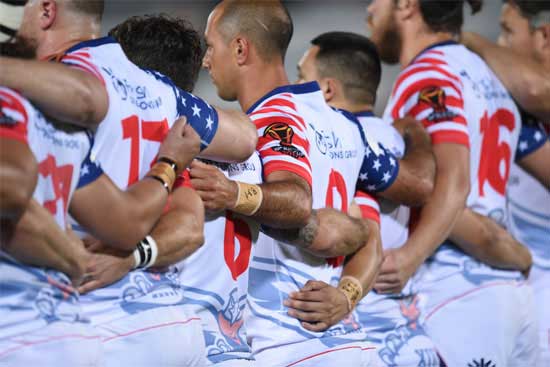 In a pivotal Pool D matchup in the Rugby League World Cup, the USA Hawks go up against the Italian Azzuri on Sunday in Townsville.

Both teams are coming off losses in Round 1 and need a win to kick-start their hopes of making the playoff rounds.

USA head coach Brian McDermott has stuck with the same starting lineup that was blasted by Fiji for their first game, but has reshuffled the bench bringing in Sam Tochterman, Hiko Malu and Gabe Farley for their first World Cup call-up.

Despite their first-up loss to Fiji, the US squad has identified some positive take-aways from the experience.

Backrower and domestic captain Nick Newlin has told RugbyLeaguePlanet it was a good battle and a good test for the Americans.

“I don’t think any of us backed down,” he said. “The boys were together the whole 80 minutes, we knew we were going to be in for a battle and we were. We’ll learn from that and move on to Italy.”

The Hawks had a much better second half against the Bati, the result of completing sets and maintaining more possession.

“We’re confident in our abilities even though it didn’t show in the scoreline [against Fiji], but we’re confident in moving forward in the next two games and we know we can do some things,” added Newlin.

Meantime, the Italians have been forced to make a change in the halves because of an injury to halfback Jack Johns, who didn’t finish their Round 1 match against Ireland.

Coach Cameron Ciraldo has called up former NRL and Super League player Terry Campese, who will slot in at five-eighth, pushing Ryan Ghietti into the #7 jersey.

In a distraction to their buildup to the game, an alleged incident involving two players in the Italian team has been referred to the integrity unit for investigation.

It relates to an incident in which Tedesco was allegedly coward punched by another member of the Azzuri squad in the team’s camp in Cairns.