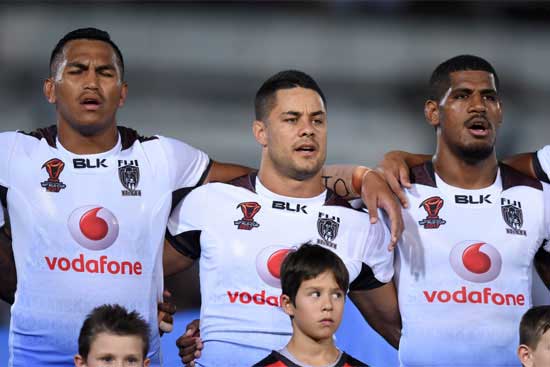 This Sunday evening will see the Hayne plane land in Townsville for the 2nd week in a row when the Fiji Bati take on the Welsh Dragons in the second round of the Rugby League World Cup.

The Fiji Bati team really took the USA Hawks by surprise last weekend. The scoreline of 58 – 12 really told the tale of a Fijian team beaming with talent led by some classy Super League and NRL players. There is one thing the Fijians don’t lack and that’s speed. As soon as they break through the line they are very hard to stop. Unfortunately for the Hawks the Fijian’s put on an awesome display of rugby league and showed why Fiji is a rising star in the World of Rugby League.

Look for the Bati to once again notch up a truck load of points against Wales in what could be another big scoreline. With players like Hayne, Naiqama and Uate giving Fiji some of the best attacking talent in the Rugby League World Cup, the Bati will be hard to stop.

If Fiji win this match they will top Pool D and secure themselves a quarter-finals berth. If they lose they will need to win against Italy next weekend in Canberra to secure a place.

Wales World Cup Campaign has kicked off to a disastrous start when they were overpowered by the Kumuls 50 – 6 in Port Moresby. Townsville won’t be as hostile as Port Moresby but it will still be hot and humid. The Welsh will need to overcome the heat and a strong Bati side to cause a major upset in this clash. The Welsh have some top level experienced players like Captain Craig Kopczak. Their problem will be a majority of the team is made up from players running around in the 2nd and 3rd level of the UK competition. Those same players will find it had to keep up with the pace of the game.

If Wales do the unthinkable and win, it will be a huge upset for Round 2 of the Rugby League World Cup. If the Welsh did manage a win they might just save their 2017 RLWC Campaign. The Dragons would need to also beat Ireland next weekend. What will make this task very hard for Wales is their for and against is already at Mount Everest levels.