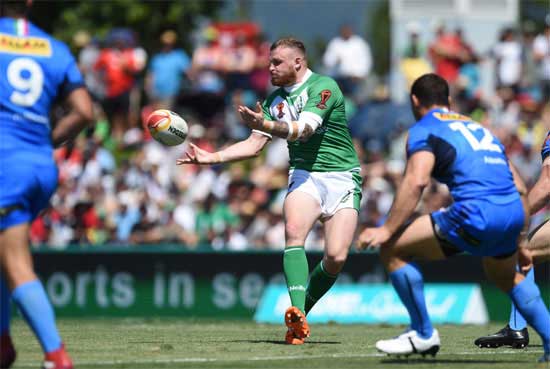 Ireland have posted the first upset of the Rugby League World Cup with a 36-12 victory over Italy on Sunday in Cairns.

The Irish controlled the game from the start and rarely looked to be threatened.

Toronto Wolfpack winger Liam Kay got things rolling early when he finished off a movement down the left flank for an Irish score within the opening two minutes.

Captain and halfback Liam Finn converted from out wide to give the Wolfhounds a 6-0 lead.

It all came from unrelenting pressure by the Irish, who didn’t give the Italians a touch in those opening minutes.

More of the same from Ireland led to a second score at around 10 minutes in, this time George King pounced on a kick-through right beside the posts to give Finn an easy conversion and a 12-0 buffer.

Five minutes later and the Azzuri gave away a penalty on their own goal line that gifted Finn an easy two points and a 14-0 Irish lead.

Due to the game being played in the early afternoon in Cairns, the RLWC had made provisions for heat breaks to be taken at the end of the first and third quarters. From the resumption, the Irish continued applying pressure and the Italians continued to shoot themselves in the foot by giving away needless penalties.

That pressure paid off in the 30th minute when Kay scored out wide in a carbon copy of his first effort and Finn converted to push the lead out to 20-0.

The Azzuri finally gave their fans at Barlow Park something to cheer about when center Justin Castellaro intercepted a pass in Italy’s red zone and sprinted 80 meters for their first try. It was converted by Josh Mantellato to make it a 20-6 ball game at halftime.

Italy came out for the second half re-energized and nearly scored right off the bat when Irish fullback Scott Grix muffed a kick-through by his Italian counterpart James Tedesco on his own goal line, but the ball beat everyone into touch.

An ensuing Italian high ball paid dividends when Mantellato plucked it out of the air and offloaded to center Nathan Milone who dotted down. Mantellato then converted to close the gap to 20-12.

But Rugby League can change in the blink of an eye and that’s exactly what happened as the Azzuri were threatening while enjoying a glut of possession after repeat knock-ons by the Wolfhounds. Suddenly, an Italian pass was intercepted, and the ball was raced towards the Italian try zone and if not for a successful chase by the Azzuri it would have been a score.

However, ongoing Irish pressure in the Italian red zone eventually led to a try by Kyle Amor, and with the Finn conversion, Ireland was out in front 26-12.

Not a minute later, and there was another Irish score when Tedesco fumbled the ball near his own line and left center Michael Morgan pounced. Finn kicked the extras to extend the lead to 32-12 as the second heat break was called at the end of the third quarter.

Ireland continued to control proceedings through the end of the match and right on fulltime they put the final nail in Italy’s coffin with a try to second-rower Louie McCarthy-Scarsbrook.

In a rare miss, Finn hit the post with his conversion attempt to leave the final score at 36-12.

The result sets up a potentially pivotal match for Ireland against Pool C rivals Papua New Guinea in Round 2.