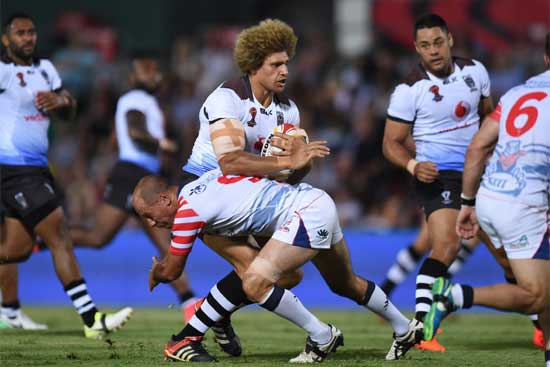 The #7 Fiji Bati have opened their Rugby League World Cup campaign with a convincing win against the #10 USA Hawks.

In front of a modest crowd of 5,103 at 1300Smiles Stadium in Townsville Saturday night, Fiji were way too classy for the Americans, outscoring them by 11 tries to two.

The Fijians made good yardage right from the opening kickoff and when they got the ball back from a US knock-on deep in Hawks’ territory, they spun the ball to the other side of the field where center Taane Milne forced it down in the corner.

Within two minutes the Bati were in again, this time captain Kevin Naiqama scooped up a kick ahead and dotted down to the right of the posts, leaving an easy conversion for Apisai Koroisau and a 10-0 Fiji lead.

And the Bati truck kept on coming right at the Hawks. With just 12 minutes gone, Milne went in for his second try. Koroisau converted and all of a sudden, the Fijians had a 16-point lead.

The US was finding the going tough and hadn’t completed a set before the opposition scored again, this time Akuila Uate went in out wide. The conversion missed, but the Bati were in front 20-0 towards the end of the first quarter.

Fiji prop Kane Evans left the field in the first half with a broken arm after scoring a try and is likely to miss the rest of the World Cup tournament.

The Bati were able to virtually run at will on offense, whereas the Americans rarely touched the ball and spent the majority of the time on defense.

As the game moved into the second quarter, the Hawks finally got on the scoreboard through a nice try by second-rower Matt Shipway. It came as the result of some deft stepping off both feet. Bureta Faraimo converted for a 26-6 scoreline.

However, Fiji wasn’t perturbed and hit back with two more tries by Naiqama and Suliasi Vunivalu, Koroisau adding the extras to one of them to make it 36-6.

Right on halftime, US center Junior Vaivai thought he was in under the posts only for the video referee to rule that his foot was touching the sideline when he caught the ball and so judged it a no try.

The second half picked up from where the first forty had left off with Jarryd Hayne scoring an early try for Fiji. Koroisau was on target with the extras to push the scoreline out to 42-6.

The Bati onslaught continued and they added to their tally via tries by Viliame Kikau, Vunivalu and Henry Raiwalui.

But inside the final five minutes, Vaivai got his well-deserved try when he finished off a backline movement out wide. Faraimo then slotted a long-distance conversion to make the final score 58-12.

The US used its interchange bench enabling Nick Newlin, Andrew Kneisly, Joe Eichner and Stephen Howard to get some game time.

“Fiji are a combination of being very fine athletes, but pretty smart as well, especially around the ruck,” said USA head coach Brian McDermott.

“They didn’t shock us. I think everybody in our camp was aware that start was always a threat. We’ve watched them play before and we knew what they were capable of.”

Hawks captain Mark Offerdahl said it came as no surprise that Fiji would come at them like a freight train.

“Defense around the ruck let us down, but at times I think we managed them well.”

Before the match, US halfback Matt Walsh was ruled out for the tournament because of a herniated disc, something he picked up during the week.

Former USA player Tui Samoa was called up to take his place in the squad.

“In the first half I thought we were really good and disciplined,” said Fiji coach Mick Potter. “In the second half we got a little bit loose and they built a bit of pressure on us.

“I think the guys were pretty keen on starting really well regardless of who the opposition was to show their best and I thought they did that. I thought they were very good and it’s hard to stay in that mindset for the whole game.”