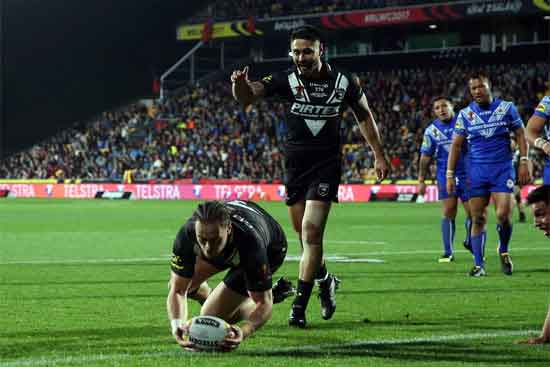 Beale, who required pain killing relief during a long stoppage before being taken from the field on a medicab, suffered a suspected broken leg as he was running in support and fell to the ground without being touched.

His loss is a blow for the new-look Kiwis, who had to overcome an emotion-charged Samoa side, with blood, sweat and tears all shed on the field as both teams wore their jerseys with pride in a tough and hard-hitting match.

Hardman Junior Paulo went from tears to aggression as he sung the national anthem before leading Samoa in a spine tingling pre-game war dance.

But it took only five minutes for New Zealand to break through Samoa’s defence and record their opening try of the World Cup.

40 meters out from Samoa’s line, Rapana flicked the ball inside to Shaun Johnson who drew the full-back and returned the ball to a full flight Rapana who ran down the field for New Zealand’s first try.

Following Johnson’s unsuccessful conversion, the match fell into an arm wrestle as the big men of both teams tried to bash their team into good field possession.

But it would be the footwork of New Zealand forward Simon Mannering that created a chance for Shaun Johnson to extend their lead 20 minutes out from half time.

Holding onto a slim 10-0 lead, Samoa needed to strike before half time to get back into the game.

And with just four minutes left to play in the half, Joey Leilua came off his edge and threw a long cut out ball to Ken Maumalo who picked up the bouncing ball and planted it down to bring the score line to 10-4 shortly before half time.

After a scrappy start to the game, completing just over 50% of their sets, New Zealand started to show glimpses of their world-class talent.

Then in the 56th minute, Johnson launched a grubber off his right boot, which sat up perfectly for Kodi Nikorima to give New Zealand a confident 20-4 lead as their attack started to gel.

New Zealand’s momentum was dealt a big blow in the 61st minute when Beale was taken from the field after suffering his injury. Beale was motionless on the field as his teammates were clearly distressed after falling to the ground after a tackle.

Despite the injury, New Zealand continued to rally and put Samoa to the sword as they ran in three unanswered tries in 20 minutes to finish the match.

As the siren sounded to finished the match, Samoa finally broke through New Zealand’s defensive line for a late consolation try, but it meant little as New Zealand finished winners, 38-8.