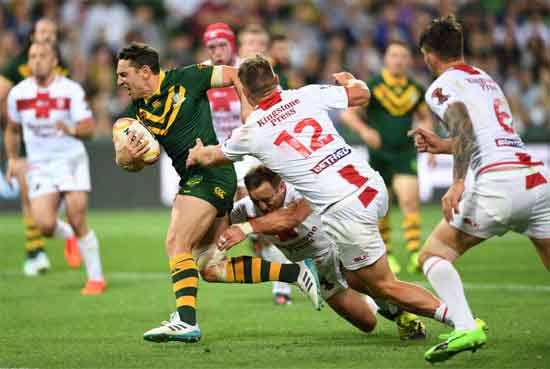 Australia has kicked off the 2017 Rugby League World Cup with an entertaining but tough 18-4 win over England in Melbourne.

England has not beaten the Kangaroos since 1995, and as Great Britain since 2006, but the match was much closer than the scoreline reflects. Apart from a blowout try to Josh Dugan right on the stroke of full-time, England pushed and harried Australia hard all the way in front of nearly 23,000 fans.

They kept the world champions scoreless for 35 minutes and were only six points behind for most of the match. The signs are there that England are improving and that they can get to the final in Brisbane.

But they are going to have to do it the hard way and without their biggest name in Sam Burgess. The South Sydney forward was brought off in the first half and did not return. Later it was confirmed that he may miss the next month of games because of a medial ligament injury. It’s a massive blow for England to face the best teams in the world without being able to call on the services of one of the best players in the world.

But England need to soldier on regardless as next they face Lebanon in Sydney, before France in Perth. Those remain must-win games.

For Wayne Bennett’s men the match at the Melbourne Rectangular Stadium started so well, with Jermaine McGillvary scoring in the fifth minute. McGillvary was a handful all night and was ably supported by the likes of James Roby and Sean O’Loughlin. England troubled the Kangaroos with their offload and crisp ball movement, Widdop setting up McGilllvary’s try.

Eventually Australia got a foot in the door after a series of England mistakes. After probing and searching for an opening, Cameron Smith pounced and set up Matt Gillett for a try. Soon the Aussies were in again when Billy Slater used his pace to cross after throwing a dummy. It stayed at 10-4 at half-time.

In the second half both teams struggled to break the line and complete their sets. England started to enjoy more field position and launched some promising attacks. Johny Lomax went close on occasion, as did Ryan Hall. England could sense an opening and James Roby was held up over the try-line.

But just as England were gaining ascendancy, they had a penalty awarded against them and Smith made it 12-4. Then less than two minutes from the end Gareth Widdop put a bomb up to the right wing. But the ball missed its intended target and went straight to Dugan. He gleefully accepted it and streaked away nearly 90 metres downfield to put the nail in the coffin.

England were sunk, beaten but not bowed. They will be back and will seek to wreak revenge on the Kangaroos in the World Cup decider on December 2.

Coach Wayne Bennett remains upbeat: “”I’m pretty happy with it overall actually. It was a top effort by the guys, they’ve improved a lot since London. Compared to London, there’s no comparison.

“They hung in there really good despite some tricky situations. played some good football, reduced their errors, still not where we want to be but a huge improvement.

“Tonight wasn’t a destination, it was part of a journey, we want to remind ourselves of that. The next four of five weeks to get all these little things right.”