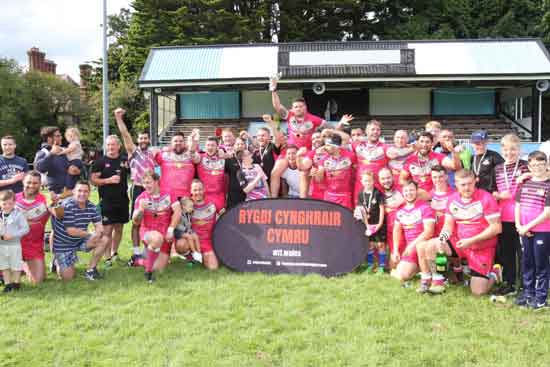 Two Welsh Rugby clubs have been nominated for prizes in “The Nation Radio Sport Awards 2017 with Sport Cardiff”.

The awards, which celebrate grassroots sporting success are to be held at Cardiff City Stadium on Friday 17th November.

The Cougars went unbeaten in 2017 to win the first rebranded Welsh Premier League competition and also provided more players than anyone else for the Wales Dragonhearts side.

They are up against Cardiff Metropolitan FC and Denshinkan Kedo.

Valley Cougars’ player-coach Dafydd Hellard said: “Being nominated for this award is a huge honour and the club is very privileged to be representing rugby league at a national awards ceremony. Not only will this help our club but hopefully it will put the spotlight on rugby league in Wales and contribute to the growth of the sport here

“The commitment and dedication that the squad has put in this year, especially with the quality of the opposition we played, has been outstanding. Our on field successes resulted in us having 10 players called up to the Wales Dragonhearts squad, five players in the Wales Student World Cup squad that went to Australia earlier in the season and a number of players called into the professional South Wales Ironmen squad.

“The successes were not only attributed to the on field performances but were shared by the hard work and enthusiasm that was put in off the field. As a result of this the club secured a further long term home at Treharris RFC, brought In key sponsors, added to our committee and most importantly negotiated the future sustainability of the club by putting in plans to extend our reach by running further junior age grade teams next season.

“All of this success wouldn’t have been possible without the support of the players, our committee, our host club Treharris and the volunteers that spend endless amounts of time ensuring the progression of the Valley Cougars.”

Cardiff Blue Dragons had to reboot their club at the start of the year and it’s been a big success.

Running sides at four different levels, their under 17s were most successful, winning the Welsh title and constantly providing players for their first team, despite their young age.

They are up against Cardiff Archers Atheltics and Cathays High School Year 9 (sport not specified).

Alf Harvey, team manager at Cardiff Blue Dragons, said: “As a club, we are proud that the effort and hard work of this group of exceptional young men has been recognised outside the rugby league family.

“This group of lads have shown that commitment to each other a willingness to put the extra effort in can reap rewards within and outside of the sport. We are proud to be part of their journey and excited for the seasons to come.”

Votes can be made at http://nationradio.wales/sport-awards-2017/. If you don’t know people in the other categories, just select at random, but please vote for our two sides. You have until Sunday 5th November at 23:59.