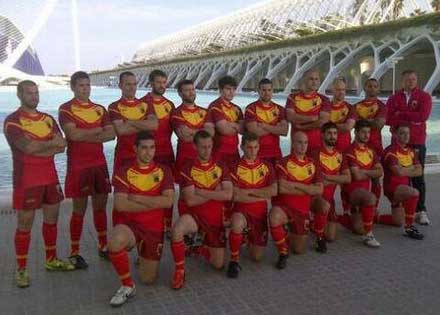 Two new Spanish coach educator-candidates continued their development journey in Valencia, as the Asociacion Española de Rugby League hosted a Level 1 coaching course before the start of its new season. The course, which was also attended by Rugby League Ireland’s Wayne Kelly, was a part of the EU-backed Training and Education Portal project, and built around a Valencian 9s tournament played between six clubs.

Salvador Ramon de Pablo and Javier Vergara Cabo have been identified by AERL to join qualified Level 1 educator Aitor Davila to strengthen Spain’s coach education ranks. Vergara is based in Seville, giving AERL a greater spread of technical know-how outside of its Valencian base.

Vergara said: “The courses were a great experience, helping me to improve my knowledge and consolidate what I’d already been taught by the AERL. The tutoring has helped me to confront with confidence the growth of rugby league in Andalusia and to be able to plan training and evaluate my players properly.

“It was wonderful to be able to meet coaches and referees from other nations who have a level of development similar to that of Spain and to be able to contrast and exchange experiences and ideas about managing training and problem solving that we face every day.”

Belfast-based Kelly added, “From what I saw at the 9s tournament, there is a lot of potential for the game in Spain and the more active coaches learning the basics of the game, the better the standard will become.”

The course was overseen by RLEF coaching manager Martin Crick. “Both of the new educators were hugely enthusiastic, and very committed,” he noted. “Salva is a teacher and a dynamic deliverer. However, neither has extensive knowledge of the game and will require more training, which is built into our continuing professional development system.”