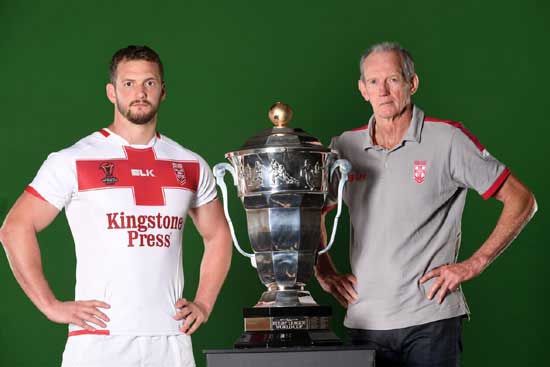 The Kangaroos, ranked number one in the world, and with both the Paul Barriere trophy and the Four Nations title currently in their possession, meet number three ranked England in the opening match of the tournament.

Led by former Australia coach Wayne Bennett, England is seeking to end an 11-year run of defeats against the Aussies. The last victory, when the team was competing as Great Britain, came in Sydney in 2006. England also has had a terrible run in past World Cups, not making the final in 2013, 2008 or 2000, and not winning the tournament outright since 1972.

Bennett was appointed at the start of 2016, replacing Steve McNamara. Under him England has failed to go to the next level yet, with losses against both Australia and New Zealand in the Four Nations last year. But they did manage an impressive victory over Samoa in Sydney and May, and there is hope with more time with his squad that the veteran 67-year-old can inspire England to new heights by giving them extra confidence and belief.

“They’ve been with me 12 months now and I’ve been with them so we all
know each other and we’ve come out for the Samoa Test,” Bennett said.

“There’s much better understanding and acceptance of what we need to do. The thing for us will be whether when we get put under pressure we make unforced errors, which we did last time we played. There’s nothing else we have to fear. We can match them in so many areas, we just have to make sure we don’t put ourselves under pressure.”

England are boosted by the return of skipper Sean O’Loughlin from injury and will field a strong contingent of NRL stars in Sam Burgess, James Graham, Josh Hodgson, Elliot Whitehead, Tom Burgess and Chris Heighington. However, they will be without star Zak Hardaker, one of the form players in Super League in 2017, after he failed a drugs test.

England know if they fail to beat Australia on Friday, as many are tipping, their World Cup is far from over. Wins over Lebanon and France will put them through to the quarter-finals, and two more victories could see a rematch with a Australia in the final at Suncorp Stadium. That is Bennett’s aim.

For the Kangaroos, complacency and over-confidence are their enemies as they seek to defend the title they wrestled back from New Zealand in 2013. Ever since Mal Meninga took the top job from Tim Sheens last year, beating rival Bennett to the post, his aim has been to restore Australia’s position at the top of the world rugby league tree. So far he has been very successful, like he was when he was in charge of the Maroons.

Meninga has helped bring pride and passion back into the Aussie jersey, repairing divisions that have previously existed between Queensland and NSW State of Origin lines, and created a strong new team culture. The Kangaroos might be without some of their big names in Johnathan Thurston and Greg Inglis, but they still have a vast array of talent to call on. Any team with Billy Slater, Cooper Cronk, Cameron Smith, Michael Morgan, David Klemmer, Matt Gillett and Boyd Cordner in it, along with a host of State of Origin players, is going to the envy of the rest of the world.

Australia are refusing to be cocky, and know they must produce and maintain their high standards to keep their hold on the World Cup trophy. A sellout crowd is expected to see them take on England in Melbourne, and the Kangaroos remain wary of the danger the English can bring. An England win would be a upset and create headlines across the globe.

“We assume that, Wayne’s only been coaching their team for 12 months so you’d think they’d be better from the experience last year having spent time together as players and a coaching staff,” Australia assistant coach Michael Hagan said.

“We’re expecting them to be better this time round and it’s very much about trying to set the standard for the World Cup. I know Wayne’s trying to suggest they need to be competitive, but I think Mal will be very clear about what’s expected and that we want to start the tournament on the right footing, which will be the main focus for our team.”