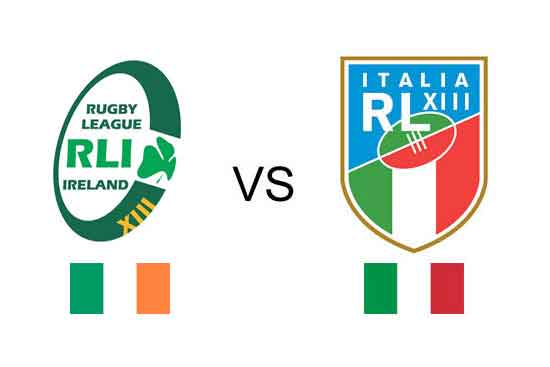 The first round of the Rugby League World Cup is nearly upon us and all 14 nations involved have named their teams for their first up games.

One of the early crossover Pool matchups is the Italy versus Ireland contest, a Pool C/D match, on Sunday in Cairns.

Basing things on Rugby League International Federation rankings, #7 Ireland should go into the game as favorites ahead of #14 Italy, but looking at the lineups of the two countries that is not necessarily so.

The Azzuri have several NRL players in their starting side whereas the Irish don’t.

The biggest name on the Italian roster is James Tedesco, an NRL player overlooked by Australia. The fleet of foot Wests Tigers fullback can be a game breaker.

Other NRL’ers who’ll be wearing the blue of Italy include Nathan Brown, Paul Vaughan and Daniel Alvaro, as well as Terry Campese, a former NRL player who more recently has been playing for Hull Kingston Rovers in the English Super League.

Jack Johns, the son of former NRL player Matthew Johns, is also in the Italian starting side.

“Ireland have named a really experienced side with players in good form this season,” said Italy coach Cameron Ciraldo.

“Also, Ireland have a very good coach in Mark Aston, so we know they will be prepared well and ready to go on the weekend.”

As for the Irish, while they may not have the NRL star power of their opposition, what they do have is the world famous Irish grit and determination, a trait made famous lately by UFC fighter Connor McGregor.

That means they don’t give up if their backs are against the wall.

“The squad are training really well, and we’ve had a great build up since we arrived,” said coach Aston.

“The debutants are gelling, and we are looking forward to the game.”

While it is a crossover game, it is also an important match in terms of how both teams eventually fare in their respective Pools.

Ireland is up against fellow European qualifier #9 Wales and #15 Papua New Guinea, one of the co-hosts of RLWC 2017, so every win is vital to be in contention to win the Pool.

The Italians, meantime, are competing against #8 Fiji and #10 USA, who face each other in the first round, so a victory would give them a leg up on whoever loses that game.

“We know we need to be at our best in the pool games to give ourselves a chance,” added coach Ciraldo.