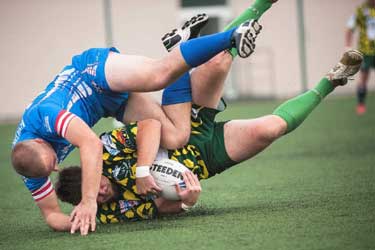 The Czech Republic and Norway have announced their squads to play in Saturday’s international in Krupka, close to the east German border. It will be the third meeting between the nations, with each having won once.

Thirteen of Ladislav Cintler’s Czech squad played in the victory against Hungary earlier in the year, Bruno Jasiczek the only debutant this time. Captain Jan Heininger said: “We are really looking forward to testing ourselves once more against Norway. We had a narrow victory over them last year but since then they have won the Nordic Cup and are in good form. We have had a fantastic and long season of rugby league in the Czech Republic this year and we are looking to round it off in style with a win for our home fans.”

In a sign of the progress being made in both countries, the combined squads are collectively drawn from 17 clubs, with Vikingene coach Dave Hunter selecting his team from a record 10 sides. Porsgrunn are contributing the largest number, including sole debutant Arne Torsen.

“We are aiming to end our international season on a high,” noted Hunter. “We have the opportunity to complete it undefeated but we will need to be at our very best to come away with a victory against a strong Czech team. Our preparation has been good. All clubs have trained hard throughout the year and are now gearing up for our semi-finals later in the month. All the players are match fit.”

Norway defeated the Czech Republic 26-14 in the 2013 European Championship C, but the Czechs got their revenge last year winning 12-6. History will be made, if Norway triumph it will be the first time they have won three consecutive games, whilst if the Czech Republic win they will have registered unprecedented consecutive victories.

Norwegian captain Kristoffer Milligan added: “Myself and the team have a job to do keep our current form going. We have had a great season so far where a number of players have stepped up their game several notches. We need to keep building on this foundation.”