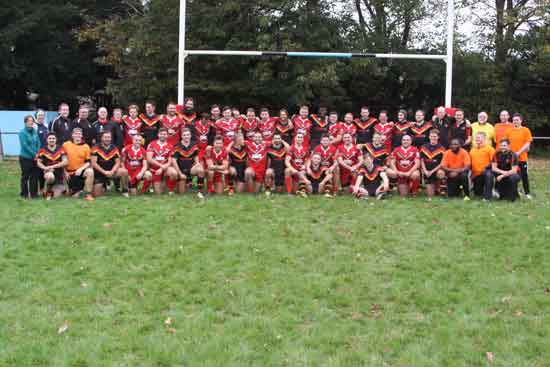 Germany avenged their loss to Wales Dragonhearts last year by beating them 38-34 at Glamorgan Wanderers in Cardiff on Saturday.

Wales selected the entire side from the community game, primarily from WRL Premier League Grand Finalists Valley Cougars and Torfaen Tigers, and their familiarity with each other’s styles showed throughout much of the game.

The visitors defended well, preventing a try early on after Shane Lee was held up over the line.

Once they got on the attack, they took the lead. Jimmy Keinhorst, playing alongside just one his brothers today (he has two others and they are in the Guinness World Records Book for most siblings in one international side), was short of the line.

From the next play, Dent sprinted through for the opening try and Brad Billsborough converted.

Wales got a try back as soon as they regained the ball. Matt Cummins scored in the corner but failed to convert his own try.

But Germany repeated Wales’ actions and scored straight away. David Ziekursch scoring in the corner with Billsborough’s kick sailing wide.

Wales immediately drew level. It was an outstanding run from Andrew Oakden where he outpaced a few Germans to score. Cummins converted to make it 10-10.

Then Wales took the lead for the first time. Jarad Hinnem also shrugging off his markers for another well-worked try.

The tries kept on coming. The outstanding Oakden, formerly of North Wales Crusaders, was forced out into the corner for his second of the game, again going unconverted.

Cummins’ kicking may have been off but his ball-handling was outstanding. He released Mathew Davies for Wales’ fifth try, scored in the corner, again the conversion falling short.

Germany got a try back straight away when Ben White jinked through with Billsborough converting.

White repeated his actions from kick-off with a similar try. This time the kick was missed and Wales held a 22-20 lead at the break.

After nine tries in 25 first half minutes, the second stanza had a quiet start. There were chances at both ends in the first quarter hour following the restart but defences looked to have improved. That was until Jimmy Keinhorst showed a bit of magic, being stopped in the first instance, then diving over from dummy half two tackles later. Billsborough kicked well to put Germany 26-22 up.

Wales levelled again when Mark Jones forced his way over just near to the sticks. Mike Hurley, taking over the kicking duties after coming on as sub, converted.

But Wales looked to have sealed the game with ten minutes to go when Davies caught a pinpoint Shane Lee kick to score in the corner. Hurley converted well to make it 34-26.

Four minutes to go and Germany pulled in back to 34-32. Billsborough scored in the corner and converted it himself.

Then with less than two minutes to go, substitute Vivian Seelweger squeezed over in the corner with Billsborough again kicking well to give Germany their four point lead back.

Wales had one final chance to win. They went for a short kick-off but the ball failed to go ten metres. Germany were awarded a penalty on the half-way line and Jimmy Keinhorst simply tapped the ball and was tackled as the final hooter sounded amidst euphoric German celebrations.

The game was played in good spirits throughout and was refereed well by James Jones in his final game as a Rugby League official.