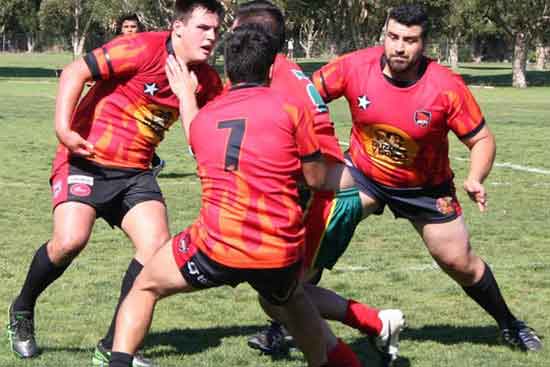 WHEN Latin America lost its first full rugby league game 114-0 to the Philippines, there was a 16-year-old kid sitting on the sideline who dearly wished he could help out.

This Saturday, October 14, the story of Brandon Tobar reaches another exciting chapter, as the former “work experience kid” lines up in the front row against Africa United at Cabramatta’s New Era Stadium.

The weekend’s special Rugby League International Federation fixture will pit representatives of two continents head-to-head in a clash that is representative of more than 75 heritages.

Hawkesbury-based Tobar will represent his Chilean heritage, continuing a lineage that saw his Santiago-born father Ernie represent the GYG Latin Heat in a tough debut back in January 2014.

“Brandon’s dad was our first Sydney-based coaching coordinator, but he ended up pulling on the boots in our debut against the Philippines when another player pulled out late,” Latin Heat co-founder Robert Burgin recalls.

“Despite being the other side of 40, Ernie was far-and-away one of the best players for us in a game where the temperature and humidity were fairly oppressive, and less than half our side had played 80 minutes of rugby league beforehand.

“Brandon was there watching his father and wishing he could play, but he was a few weeks too young at that point in time to qualify for senior football.

“He’d been to most of our training sessions and we knew he was a talented guy, but he was consigned to hanging around sort of like a work experience kid at that stage unfortunately.”

In 2014 Brandon was named a winner on The Footy Show’s League Of Their Own segment while playing junior football for the Windsor Wolves.

Later that year, barely nine months after his father played for the Latin Heat, the youngster starred at centre in a breakthrough 40-6 win against Portugal, scoring a 50m intercept try.

That same day he was named as joint inaugural winner of the Latin Heat’s Best Under 18 Player trophy at the team’s annual awards.

From there the youngster chose to take some time away from football, concentrating instead on finishing his high school exams.

His return to rugby league and graduation from centre to prop within the squad comes against a talented Africa United squad that, like the Latin Heat team, has many players descended from refugee backgrounds.

Africa United last year defeated a Latin Heat Development Squad 48-6, but this time around will face a Latin Heat Elite Team which should provide for a much more even contest.

Latin Heat’s Elite Squad will be coached for the first time by Jye Sommers, the inaugural Latin Heat co-captain who helped mentor Tobar from a young age.

Kick-off in the match has been moved forward to 2.30pm, held as a curtain-raiser to the Malta v Hungary match which commences at 4.15pm.

Both games will be livestreamed via Spot on Video Sports Recording.